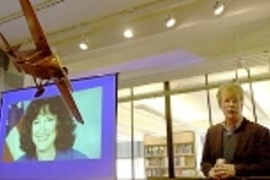 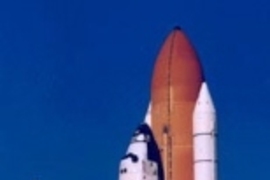 Caption:
Senior research engineer in aeronautics and astronautics Charles Oman spoke briefly about astronaut Laurel Clark, whom he knew and worked with, at a brief MIT memorial held Monday to honor the astronauts of Columbia.
Credits:
Photo / Donna Coveney

Caption:
Space Shuttle Columbia's final launch from Pad 39A at the Kennedy Space Center on the morning of Jan. 16, 2003.
Credits:
Photo / John Tylko

CAMBRIDGE, Mass.--As the nation mourned the loss of seven astronauts and NASA's investigation of Saturday's space shuttle disaster focuses on possible failure of the vehicle's thermal protection system, MIT experts reflected on the science, engineering and humanity behind the loss.

"This is a tragedy for our nation and our community," said Professor Edward F. Crawley, head of MIT's Department of Aeronautics and Astronautics. The department held an impromptu memorial service in the Seamans learning laboratory in Building 33 on Monday.

"When something like this happens, we have to reflect on the tremendous bravery of these individuals," he said to more than 100 people who came to share a moment of silence for the crew of the shuttle Columbia. Aware of the inherent risks in "sitting atop a controlled explosion and the fiery heat of reentry," they made the "ultimate sacrifice" in the name of space exploration and the quest for knowledge, he said.

As NASA and others investigate the cause of the disaster, MIT experts applied their knowledge of the space shuttle's engineering to the first bits of information on potential causes.

The thermal protection system--which includes the tiles that cover the shuttle's surface and protect it from the fierce heat of reentry into the Earth's atmosphere--is under close scrutiny.

The tiles are "a potential failure mode that NASA has been very much aware of from the beginning, and near the top of the list of concerns in the early '80s," said Charles M. Oman, senior research engineer in aeronautic and astronautics.

Over the years, ideas and methods under discussion for fixing tiles in orbit have even included requiring crew members to replace missing or damaged tiles with a trowel and glue during space walks. "As NASA's confidence grew as missions went by, the predicted 'zipper effect' didn't seem to be occurring," Oman said. The zipper effect is where one lost tile creates a chain reaction that causes failure of downstream tiles in the airflow. "It creates a hot spot that melts the underlying aluminum structure. It may turn out that that's what caused this, but we'll have to wait and see," said Oman.

Oman said that based on video from a West Coast astronomer, chunks were coming off the vehicle as it crossed California, which would support the idea that the tiles were at fault.

The loss of protective tiles from the underbelly of the space shuttle Columbia or even a series of cracks in the section containing the protective tiles due to impact of a foreign object during liftoff might have caused Saturday's catastrophe, according to Subra Suresh, head of MIT's Department of Materials Science and Engineering.

At about the point over Texas where the space shuttle disintegrated, it would have been exposed to the highest temperatures and thermal stresses of reentry, said Suresh, the Ford Professor of Engineering. Suresh is an expert on the materials aspects of failure.

The ceramic tiles are made of a material that is known to be resistant to reentry temperatures and protect the shuttle. However, said Suresh, if a series of tiles were damaged by a foreign object during liftoff, "that might have exposed the shuttle to those high temperatures, which could have led to a catastrophic event." He cautioned that all of this is speculation pending further details.

Since Columbia flew 28 missions, there could also be the possibility of damage due to thermal fatigue. Thermal fatigue is a weakening of the interface between the shuttle and the tiles caused by repeated exposure to very high temperatures followed by thermal shock, or a quick cooling when the craft lands. Thermal fatigue and thermal shock, however, are very difficult to assess given the level of information available at this time, Suresh said.

While there were no MIT alumni or experiments on this mission, Oman was acquainted with astronaut Laurel Clark. Her husband, Jon Clark, is a flight surgeon, a colleague of Oman at the Johnson Space Center, where Oman conducts experiments on the human health effects of space travel.

"They were very much a Navy couple," Oman said. Laurel, also a flight surgeon, "was interested in flight safety questions. She started out in submarine medicine and studied how the body reacts to increased pressure and the closed environment of a submarine. She was also an accomplished scuba diver.

"She applied to be an astronaut and was astonished to be selected, but we who knew her weren't surprised. Clearly, in terms of her background, she had the right stuff. She believed devoutly in the value of human space flight and that's her legacy," he said. She would not have wanted humans to be barred from space because of the Columbia accident, Oman added.

David W. Miller, associate professor of aeronautics and astronautics and director of the Space Systems Laboratory at MIT, agreed that humans in space are critical. "Humans in space play a very important role as observers in the laboratory environment of the International Space Station," he said. "My own terrestrial lab here has plenty of equipment, but the best piece of 'equipment' are humans who understand the problem and observe what may be going wrong or right with the experiment."

Miller thinks that NASA will have to think about alternative access to the International Space Station. He suggested "some kind of mixed fleet of two parallel systems, not necessarily of equal capacity--perhaps something like a Soyuz."