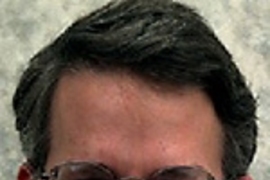 One of the "detectives" in the latest high-profile case of scientific misconduct led a rapt audience of about 300 physicists and others through the investigation and its sad conclusion at a talk last week in Room 10-250.

In late 2002 Hendrik SchÃ¶n was found guilty of pervasive scientific misconduct for falsifying or fabricating the data behind several published technical papers. Earlier the same year the young scientist from Bell Labs "appeared to be on a fast track to a Nobel Prize for his experiments in electrically conducting organic materials," said Monroe, who was on the five-member panel that ultimately investigated SchÃ¶n.

Monroe began his remarks by telling his audience that "the hard part of this is trying to convince you that anyone could have seen [SchÃ¶n's work] as real." He went on to note, for example, that SchÃ¶n was the author of some 100 technical papers in just a few years. "In 2001 he wrote a paper every eight days. I know people who couldn't write one paper every eight days if they made it all up," Monroe said.

Many of SchÃ¶n's papers described fantastic breakthroughs, and were well-read and referenced by other scientists. "So again," Monroe said, "in hindsight it's hard to see that he got away with it."

Meanwhile, scientists struggling to reproduce SchÃ¶n's results ("the gold standard of science is reproducibility," said Monroe) couldn't. Further, some of his work started violating the laws of physics. "This all caused much discomfort, but no one thought misconduct," Monroe said.
The smoking gun came in the guise of "suspicious curves" in multiple papers. The data making up those curves, though represented as different, turned out to be the same.

Enter the investigative panel, which proceeded to draft--and explore--24 allegations of misconduct. Although "we thought SchÃ¶n was behind it," Monroe said, the panel had to make sure that his co-authors were not involved.

In the end, they concluded that SchÃ¶n alone was guilty of 16 of the allegations. Among other evidence, the panel found that no one else made the final samples referred to in the papers, no one else prepared the figures that accompanied the papers, no samples still exist, and virtually no primary data are available. In addition, no one else witnessed the phenomena SchÃ¶n claimed to see. And those phenomena were so spectacular that any other scientist "would have pulled in the janitor to come see," Monroe said.

The SchÃ¶n Affair, as Monroe refers to it, ultimately led to new guidelines for collaborating on papers from the American Physical Society.