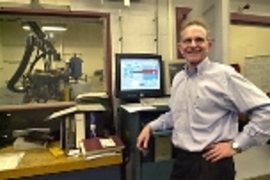 To develop the eco-friendly car of the future, the United States must not only invest in promising technologies like fuel cells and batteries, but also continue to improve mainstream automotive technologies, said John B. Heywood, the director of MIT's Sloan Automotive Lab.

Professor Donald R. Sadoway of the Department of Materials Science and Engineering also stressed a many-pronged approach to the problem. Among his suggestions: take old vehicles off the roads via financial incentives for owners.

"There is a wide range of things that should be done," said Heywood, the Sun Jae Professor of Mechanical Engineering. Com-menting on President Bush's recent proposal to pump $1.2 billion into developing clean hydrogen-powered cars, he said, "This is an important initiative, but it's too focused and it's nowhere near enough.

"The danger of highlighting a single technology," he said, is that other approaches are ignored. And if that technology ultimately doesn't work, we'll have lost valuable time, "resulting in a much larger problem."

Hydrogen-powered cars essentially depend on the development of fuel cells. In these devices, a chemical reaction between hydrogen fuel and oxygen generates electrical energy, producing water as a byproduct.

But fuel cells today have significant problems that will be difficult to overcome, said Heywood and Sadoway, an electrochemist working on advanced batteries.

"Their state of development is oversold," said Heywood. Sadoway put it another way: "In the context of portable power, fuel cells are not a technology, they're a laboratory curiosity."

Among other things, fuel cells are now far too expensive for use in mainstream applications like cars. That's because they're made partly of platinum, the same metal used in expensive jewelry. And an alternative to platinum will be difficult to discover, said Sadoway; "that's Nobel Prize-winning work."

Another key challenge: "How are we going to produce, distribute and store the hydrogen" for fuel cells, asked Heywood. He pointed out that the production of hydrogen itself involves generating various greenhouse gases. "So when people argue that the fuel cell produces only water vapor, that's deceptive in the context of a complete transportation system," he said.

Nevertheless, Heywood stressed that it's still worth investing in the devices because "it's much too early to judge what technologies may win out."

Research on promising automotive technologies and fuels is an important long-term approach to a sustainable transportation system. "But even if everything went stunningly well," said Heywood, implementation of those advances "is still 30 years off." That's partly because it will take about that long to replace the existing fleet of vehicles.

As a result, Heywood emphasized that there is much we can do starting very soon. For example, there are several technologies starting to go into production that will make mainstream cars cleaner. These include varying the timing of the valves that open and close in the engine cylinder, letting fuel and air in and exhaust out. Making vehicles lighter, improving the tires so there's less resistance as we drive, and using cleaner fuels are other examples of improvements that could be implemented in the shorter term.

The nation also needs "a whole series of measures that start to pull more efficient technologies into use," Heywood said. By considering a mixture of measures rather than focusing on one alone, such as increasing the taxes on gas, "you dilute the political resistance." Heywood and a colleague are trying to develop such a balanced approach.

There's no one solution to the overall problem of designing a sustainable transportation system, Heywood said. "Rather, there are lots of pieces, which individually may be small, that can work together. If we could just realize that at a national level, we'd do so much better."