Scientists pinpoint how fish save energy by swimming in schools 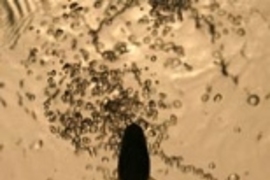 ↓ Download Image
Caption: The view from below: a rainbow trout (Oncorhynchus mykiss) swimming in between vortices (revealed here with bubbles) shed by a cylinder placed in an experimental flow tank.
Credits: JAMES C. LIAO, HARVARD UNIV. 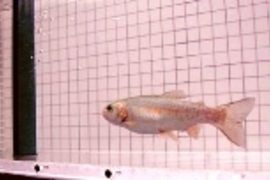 Caption:
The view from below: a rainbow trout (Oncorhynchus mykiss) swimming in between vortices (revealed here with bubbles) shed by a cylinder placed in an experimental flow tank.
Credits:
JAMES C. LIAO, HARVARD UNIV.

Using a tank designed to mimic a turbulent waterway, scientists have found that fish use a unique and clever swimming motion to harness the energy of eddies in flowing water. By essentially hitching a ride and letting these vortices propel them along, the scientists say, fish can swim against a current with considerably less exertion than is required in calmer settings.

The study provides the first direct view of the technique used by fish to exploit the energy of eddies generated by the swimming movements of other members of a school.

The work, reported in the Nov. 28 issue of Science by researchers from MIT and Harvard, could have many engineering applications, from the design of better fish ladders and passageways at hydroelectric dams to autonomous underwater vehicles capable of negotiating turbulent flows in natural habitats.

"This study reveals mechanisms through which the energy contained in the ed-dies of turbulence can be extracted, with great reduction in the required swim-ming effort," said Michael S. Triantafyllou, a professor in MIT's Department of Ocean Engineering. "Since turbulence is present everywhere in moving water or air -- in the ocean, the lakes, and streams, as well as the atmosphere -- many op-portunities arise for engineering applications of these new principles of energy extraction."

First author James C. Liao, a graduate student in Harvard's Department of Or-ganismic and Evolutionary Biology, likens the technique fish use to swim against a turbulent current to tacking, the back-and-forth motion that allows a sailboat to move forward passively, if somewhat indirectly, against a breeze.

The researchers looked at animal behavior and the physics of water flow. They placed an ordinary cylinder in a flow tank to create eddies similar to those gen-erated in the wild by the flow of water past submerged branches or coral reef formations, or the propulsive movements of other fish, and then recorded the muscle activity of trout as they swam among the vortices generated downstream from the cylinder.

They discovered a previously unknown swimming motion, dubbed the "Karman gait," that exploits the energy of eddies to minimize fish muscle activity. Viewed from below, the bodies of fish swimming in turbulent waters flutter gently, like a flag flapping in the breeze, a motion that entails far less muscle activity than swimming through still waters.

"This new link between the use of eddies and decreased muscle activity supports a hydrodynamic explanation for fish distributions in schools and in current-swept habitats," Liao said. "Our work is the first to establish a causal mechanism to explain the hydrodynamic benefits of fish schooling, and resolves the paradox of how wild fish can move upstream against currents faster than they have been reported to swim in the laboratory."

Additional authors of the paper are George V. Lauder, a professor of biology at Harvard, and MIT alumnus David N. Beal (S.M. 1997, Ph.D. 2003). The work was supported by grants from Sigma Xi, the American Museum of Natural History, the Robert A. Chapman Memorial Scholarship at Harvard, the National Science Foundation, and MIT Sea Grant.