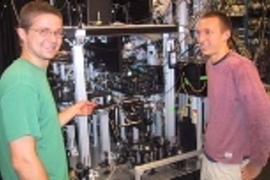 ↓ Download Image
Caption: Tom Pasquini (left) and Aaron Leanhardt (right) in front of the machine where they and collaborators cooled a sodium gas to 500 picokelvin.
Credits: COURTESY KETTERLE LAB 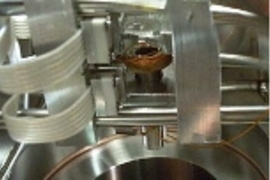 ↓ Download Image
Caption: A view into the vacuum chamber where sodium atoms were cooled down to 500 picokelvin. The atoms where magnetically confined by the coil in the center which is 1 cm in diameter. The atoms were "levitated" 0.5 cm above the coil.
Credits: COURTESY KETTERLE LAB 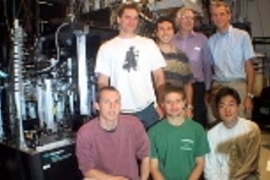 Caption:
Tom Pasquini (left) and Aaron Leanhardt (right) in front of the machine where they and collaborators cooled a sodium gas to 500 picokelvin.
Credits:
COURTESY KETTERLE LAB

Caption:
A view into the vacuum chamber where sodium atoms were cooled down to 500 picokelvin. The atoms where magnetically confined by the coil in the center which is 1 cm in diameter. The atoms were "levitated" 0.5 cm above the coil.
Credits:
COURTESY KETTERLE LAB

CAMBRIDGE, Mass. -- MIT scientists have cooled a sodium gas to the lowest temperature ever recorded -- only half-a-billionth of a degree above absolute zero. The work, to be reported in the Sept. 12 issue of Science, bests the previous record by a factor of six, and is the first time that a gas was cooled below 1 nanokelvin (one-billionth of a degree).

"To go below one nanokelvin is a little like running a mile under four minutes for the first time," said Nobel laureate Wolfgang Ketterle, co-leader of the team. Ketterle is MIT's John D. MacArthur Professor of Physics.

"Ultra-low temperature gases could lead to vast improvements in precision measurements by allowing better atomic clocks and sensors for gravity and rotation," said David E. Pritchard, a pioneer in atom optics and atom interferometry and co-leader of the MIT group. He is the Cecil and Ida B. Green Professor of Physics.

The researchers also expect new phenomena to occur at such low temperatures involving, for example, how cold atoms interact with surfaces and how atoms move when they are confined to a narrow channel or layer. These gases form a remarkable state of matter called a quantum fluid, so studying their properties also provides new insights into the basic physics of matter.

At absolute zero (-273 degrees C or -460 degrees F), all atomic motion comes to a standstill since the cooling process has extracted all the particles' energy. By improving cooling methods, scientists have succeeded in getting closer and closer to absolute zero. At room temperature, atoms move at the speed of a jet airplane. At the new record-low temperature, atoms are a million times slower -- it takes them half a minute to move one inch.

In 1995, a group at the University of Colorado at Boulder and an MIT group led by Ketterle cooled atomic gases to below one microkelvin (one-millionth of a degree above absolute zero). In doing so they discovered a new form of matter, the Bose-Einstein condensate, where the particles march in lockstep instead of flitting around independently. The discovery of Bose-Einstein condensates was recognized with the 2001 Nobel Prize in physics, which Ketterle shared with his Boulder colleagues Eric Cornell and Carl Wieman.

Since this breakthrough, many groups worldwide now routinely reach nanokelvin temperatures; the lowest temperature reported before now was 3 nanokelvin. The new record set by the MIT group is 500 picokelvin, or six times lower.

At such low temperatures, atoms cannot be kept in physical containers, because they would stick to the walls. Furthermore, no known container can be cooled to such temperatures. Therefore, the atoms are surrounded by magnets, which keep the gaseous cloud confined. "In an ordinary container, particles bounce off the walls. In our container, atoms are repelled by magnetic fields," explained physics graduate student Aaron Leanhardt.

For reaching the record-low temperatures, the MIT researchers invented a novel way of confining atoms, which they call a "gravito-magnetic trap." As the name indicates, the magnetic fields act together with gravitational forces to keep the atoms trapped.

All the researchers are affiliated with the MIT Department of Physics, the Research Laboratory of Electronics and the MIT-Harvard Center for Ultracold Atoms (funded by the National Science Foundation).

"It's exciting to have the low-temperature record at MIT where we have one of the world centers for ultralow-temperature research," said Dan Kleppner, director of the Center for Ultracold Atoms and MIT's Lester Wolfe Professor of Physics Emeritus.