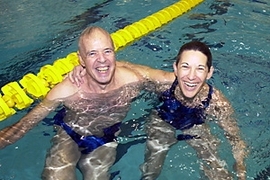 ↓ Download Image
Caption: Al and Barrie Zesiger are all smiles after their first swim in the pool that bears their name.
Credits: Photo / Donna Coveney

Caption:
Al and Barrie Zesiger are all smiles after their first swim in the pool that bears their name.
Credits:
Photo / Donna Coveney

The Olympic-class Zesiger Pool was built to accommodate the MIT swimming, diving and water polo teams in a well-lit natatorium that soars five stories high.

"We were struck most by how freeing it feels to be in the water. The huge expanse above the pool gave us a sense of being suspended in a large space, far away from the distractions even of other swimmers," said Barrie Zesiger about the first swim she and her husband Albert took in the new pool named for them. "We have lived with a computer-rendered picture for the past several years; there is nothing that can compete with the real thing."

A second pool in the natatorium, this one for teaching and recreational lap swimming, looks small next to the Zesiger Pool. But it's actually the same size as the old Alumni Pool. All three pools are available to the MIT community now.

"We have long been appalled at the incongruence between fitness and beauty," said Zesiger. "Now at the Z Center these two important attributes have been brought together."

The Zesiger Pool's design incorporates all the characteristics of a really fast pool, and the bleacher seating on three sides of the shallow (seven-foot) end will allow 450 spectators to watch the MIT athletes take advantage of that design to set speed records and win matches.

"There will be new MIT records set here constantly during the next year because the pool is fast and we've got some really good swimmers on the teams," said Roger Crosley, director of sports information and communications.

"The new facility finally allows the water polo team to practice in a regulation facility: 20 meters by 20 meters," said Jeffrey Ma (S.B. 1994), MIT's varsity water polo coach. "We can host invitationals and championships. Other teams are actually begging to play us in the Z Center."

A fast pool is one that offers little resistance to a swimmer. According to Carrie Moore, aquatics director at the Zesiger Center, there are four primary ways to reduce resistance in a pool.

One is to make it deep. The Z Pool is seven feet deep along one of its 50-meter sides. The other side is seven feet deep at the shallow end and 14 feet at the deep end. "When you take a stroke, you push the water back and down. It hits the bottom of the pool and bounces back up at you, causing resistance and slowing the swimmer down," said Moore. Obviously, the deeper the pool, the less resistance the swimmer gets with every stroke.

The second way to reduce resistance is to eliminate side vents that shoot out water laterally, sometimes directly opposing the swimmer's motion. The Z Pool is bottom-fed by many vents sprinkled throughout the pool.

"In the older pools, the vents would be in the front and back and there would literally be slow lanes," said Moore. "You've seen those things on TV when there's a swimmer swimming against a current [and not making any progress]. Well, that's a gross exaggeration, but you get the idea."

Third is the width of the lanes. Wide lanes make a pool faster, because each swimmer's wake dissipates before it can enter the next lane and create resistance for another swimmer. The Z Pool has 20 eight-feet-wide lanes along its 50 meters. Each lane is 25 yards in length.

And finally, a deep gutter keeps the water from rolling back out. In the Z Pool, the gutters drop down two feet to swallow the water, which is sent through a filtration system and back into the pool. A shallow gutter fills up quickly, and the water rolls back out, creating waves and - you guessed it - resistance.

The ceramic tiled walls of the pool help a swimmer's speed as well, said Moore. A fiberglass pool wall will flex to absorb some of the energy of a swimmer's push, but when a swimmer pushes off against a hard ceramic wall, little energy is absorbed.

The more than one million gallons of water in the Z Pool are kept at 80 degrees (plus or minus one degree); the teaching pool is kept at 83 degrees, with one degree of variance. Ambient temperature in the natatorium is about 85 degrees.