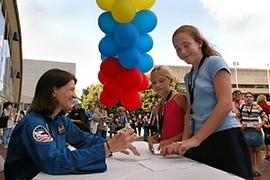 Speaking before a full house of young girls and their parents in Kresge Auditorium, Sally Ride described her early interest in science. "I remember the early days of the space program. In elementary school, our teacher rolled in a TV set and we watched some of the first space missions," she said. "It really ignited my interest."

"When I was in high school, I was really lucky to have two teachers who encouraged me," Ride said. "They made me believe in myself."

That belief in herself rang clearly through Ride's presentation, said two middle school girls who attended the day-long event.

"Her voice was bold and proud. That was something to remember," said Sarah Straubinger, 10, of Belmont. Of all the day's activities, she liked Ride's talk in Kresge best, "because she told about her childhood and how her father didn't know anything about science but she did."

Arianna Schatzki-McClain, another 10-year-old from Belmont, preferred the hands-on exhibits at the beginning, "especially the ones where you could do an activity. The best one was letting the kids try to make the robot pick up the beach ball and put it in the trash can."

To the delight of both girls, Ride wore one of the blue NASA jumpsuits that she had actually worn in space.

Speaking of her selection as a NASA astronaut in 1978, Ride said, "My father was probably the happiest person in the world when I was selected as an astronaut. He had a great deal of difficulty explaining what I did when I was an astrophysicist, but when I became an astronaut, his problems were over," she joked.

Ride described her two space flights aboard the shuttle Challenger in 1983 and 1984. "When I was a little girl, I dreamed of flying in space. Amazingly enough, and I still can't believe it, that dream came true. And through hard work and a good education, all of you will reach for the stars and that dream will come true for you," said Ride, who received a Ph.D. in physics from Stanford University in 1978.

"It's going to be a really exciting day when an astronaut lands on Mars," Ride said. "And who knows, some of the young people in this room are at the right age to be able to do that some day."

Dreams do come true. Catherine "Cady" Coleman (S.B. 1983 in chemistry) attended a lecture at MIT by Sally Ride in the early 1980s. "I listened to what she had to say and realized that this was the job that I wanted," Coleman said. "I was really able to see someone that I could identify with. She really seemed like a neat lady, and she had a job where her education seemed to count. She also got to go to space and fly jets, and I thought, "What more could a chemist want?" Coleman was selected as a NASA astronaut in 1992 and has logged more than 500 hours in space on two missions in 1995 and 1999.

Professor Maria Zuber of the Department of Earth, Atmospheric and Planetary Sciences (EAPS) was one of the organizers of the Sept. 22 event and ran a workshop for girls called "The Exploration of Mars."

"If we can just get five or six girls who end up pursuing a career in science, it will be well worth it," she said.

Other MIT participants included Professor Nancy Leveson of aeronautics and astronautics, who spoke to parents on the progress and challenges in gender equality in the classroom and workplace; and Professor Leigh Royden of EAPS, who gave a workshop for girls titled "Meteorite Impacts and Volcanic Eruptions: on Earth and Off." Amrys Williams (S.B. 2002), an admissions counselor in the Admissions Office, also hosted a workshop for parents called "Preparing Your Daughter for College."

Ride is a physics professor at the University of California at San Diego. She is the author of four children's books on space exploration: "To Space and Back," "Voyager: An Adventure to the Edge of the Solar System," "The Third Planet: Exploring the Earth from Space" and "The Mystery of Mars."