Single largest gift from a private foundation in MIT's history establishes the Picower Center for Learning and Memory Nobel laureate Tonegawa's goal is to discover how the brain functions and what causes schizophrenia, Alzheimer's and other diseases
Publication Date:
Press Inquiries 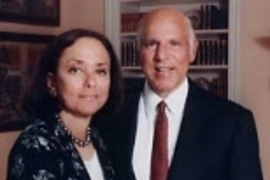 CAMBRIDGE, Mass. -- A $50 million gift from the Picower Foundation earmarked specifically for brain and cognitive research will speed up the pace of MIT's drive to discover the intricate functioning of the brain, and the malfunctions involved in schizophrenia, memory loss, Alzheimer's, Huntington's disease and other brain disorders. This is the single largest gift given to MIT by a private foundation in the university's history.

The gift from the Picower Foundation of Palm Beach, Fla., was announced at a ceremony today on the MIT campus. It will permanently establish the Picower Center for Learning and Memory at MIT, directed by Nobel laureate Susumu Tonegawa, professor of biology and neurosciences and a Howard Hughes Medical Institute investigator. The center is one of four MIT entities exploring brain and cognitive science.

"The next great frontier in science is the neurosciences," said MIT President Charles M. Vest. "The molecular basis for learning and memory is one of the most important human and scientific issues of our time. This magnificent grant from the Picower Foundation and the leadership of Susumu Tonegawa will provide a critical element in MIT's multidisciplinary, world-class brain and cognitive sciences complex," Vest said.

The mission of MIT's Center for Learning and Memory is to understand the mechanisms that allow the brain to learn, remember and think. Established in 1994, the center explores learning, memory and cognition as well as development in the growing brain by using a multidisciplinary approach that addresses every level of brain function from molecules, to synapses, neural circuits and behavior.

The Picower Foundation gift will fund a new state-of-the-art facility for the center, plus $12 million for four endowed professorships and $8 million for research and related activities.

"It is apparent to Jeffry and me that many diseases once considered incurable will, in fact, be cured in the not-so-distant future," said Barbara Picower, executive director and trustee of the Picower Foundation. Since we are living longer lives, we need our minds to keep pace. We believe the research led by Dr. Tonegawa will have a tremendous impact not only on human health, but on virtually everything we do."

"After much investigation, Jeffry and I chose to support MIT's Center for Learning and Memory," continues Picower. "We are confident that MIT, with its proven track record of scientific advancement and its world class faculty, is uniquely positioned to meet the challenges of this new frontier."

"The Picower gift helps our efforts in three major ways," Tonegawa said "First, it provides the center with new contiguous and modern laboratory and office space. Second, it provides endowed professorships, which enable us to recruit additional world-class neuroscientists including one working on the basic mechanisms of neurological or psychotic diseases. Finally, the Picower gift helps set up various central facilities, organize international symposia and workshops, and sponsor a visiting scholar program, all of which will enrich the center's research activities enormously."

"Overall, a gift of this size is rare and will make the Picower Center a truly unique and attractive research and educational center in the field of neuroscience, learning and memory and other cognitive functions," said Tonegawa, who won the 1987 Nobel Prize in Physiology or Medicine for discovering how gene fragments combine to produce countless variations in immune response of humans.

Dean of Science Robert Silbey commented, "One of the key advantages of the Picower contribution is that it will add to MIT, already known for its work in artificial intelligence, language and the mind, a huge strength in molecular and cellular neuroscience. MIT embraces an integrated approach to brain and cognitive sciences in which the brain's molecules, cells, networks and systems are explored in the context of the whole organ. While other institutions are known for individual departments that focus on single aspects of brain research such as molecular research or psychology, MIT is taking a comprehensive approach to the study of the brain, from the molecular biology of the synapse to the study of language," Silbey said.

Curing addictions, brain disorders, mental illness and brain damage, as well as enhancing normal brain function and understanding the nature of consciousness, are some of the ultimate goals of neuroscience research at MIT.

The Picower Center for Learning and Memory is one of four MIT entities involved in exploring brain function through biology, electrical engineering, computer science, linguistics and bioengineering. The Department of Brain and Cognitive Sciences and the Picower Center will work with the McGovern Institute for Brain Research, led by Nobel laureate Phillip A. Sharp, and the Athinoula A. Martinos Center for Functional and Structural Biomedical Imaging, led by Bruce Rosen and run by the Harvard-MIT Division of Health Sciences and Technology (HST) and the Massachusetts General Hospital.

The Picower Foundation, one of the largest and most generous in the nation, supports a wide range of medical research, arts and educational programs across the country. With a mission of helping people improve the quality of their lives by providing services that enable them to become productive, self-sufficient and healthy, the foundation concentrates on a variety of activities including innovations in schools, curriculum development, after school and summer programming, the arts, tolerance education and biomedical research. The Foundation Center, a non-profit organization which documents the activities of philanthropic organizations, ranks the Picower Foundation among the 100 largest U.S. grant making foundations (by the market value of its assets), based on the most current audited financial data in the Foundation Center's database as of December 28, 2001.