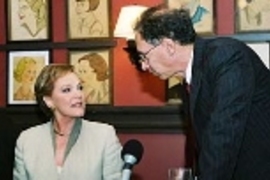 The two are collaborating with a team of physicians and researchers led by Dr. Steven Zeitels of Massachusetts Eye and Ear Infirmary that is studying ways to restore elasticity to damaged vocal cords.

Julie Andrews, the actress and singer who suffered loss of her singing voice following vocal cord surgery in 1997, presided over the press conference to bring attention to the problem of vocal cord disorders, which affect millions of people. Scarring left by the surgical removal of non-cancerous nodules from Andrews' vocal cords damaged the elasticity of those delicate organs, limiting her range and her ability to hold notes. She has been working with Zeitels, director of the laryngology division at Massachusetts Eye and Ear, to regain her singing voice.

The new research initiative will draw upon the expertise of specialists in voice surgery and laryngology, laser surgery and biomedical engineering at MIT, Massachusetts Eye and Ear, Massachusetts General Hospital and Harvard Medical School.

"We hope to be able to restore at least basic voice to those afflicted with moderate to severe vocal cord scarring, such as that experienced by intubated infants and cancer patients," said Hahn, whose role will be to determine quantitative measures for healthy vocal fold biochemistry and biomechanics.

"The long term goal is to develop a tissue engineered implant that is capable of restoring near normal functionality to scarred vocal cords. But, there is much groundwork that must be laid before implant development can really begin," said Hahn.

Langer , the Germeshausen Professor of Chemical and Biomedical Engineering, is well-known for the development of novel materials through tissue engineering. Most recently, his laboratory created a material called biorubber , which has the elasticity and memory of rubber, along with the very unusual characteristic of compatibility with the human body. The researchers hope that it can be used as scaffolding to design human organs such as lungs and heart valves. In March, the Langer team announced the discovery of a source of cells for engineering human blood vessels.

"The fundamental approaches that we've developed have helped lead to the creation of new tissues such as skin and cartilage," said Langer, whose work on vocal cords will be a "new direction" for his lab. "We're at the point where scientists can now make some new tissues for use in people."

Langer said one approach will be the injection of a substance -- such as elastin or collagen, or a polysaccharide such as hyaluronic acid -- into scarred vocal cord tissue to see if that will improve its elasticity. "This would be the simplest and maybe the easiest [solution] from a regulatory standpoint, but it might have the lowest chance of success in terms of matching the properties of the vocal cord," said Langer.

The next approach could be creation of a "designer material" to replace portions of the vocal cord. A third approach could involve the use of tissue engineering to "grow" a new vocal cord -- or grow a combination of cells and polymers that would serve as the matrix for a vocal cord, Langer said.

Andrews has visited the Langer lab several times to see the kind of work that goes on there. "She doesn't have her five-octave voice any more. She says she can't hold notes the way she used to," said Langer, who belittled his own singing voice. "Even with damaged vocal cords, Julie Andrews would be a much better singer than I."

"Ms. Andrews was the first celebrity I had ever met," said Hahn. "But she is so completely down-to-earth that you can't help but feel comfortable around her. Needless to say, I was excited about having her come to the lab. I grew up listening to the 'Sound of Music' and 'Mary Poppins.' I grew up with her voice and her enthusiasm."

"She's a great person," said Langer. "The reason our lab does all this stuff is because we want to see it help people. This is another example of that."