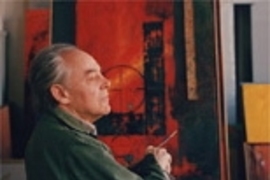 Caption:
Gyorgy Kepes, with brush in hand, works in his Boston studio in this 1989 photo.
Credits:
Photo / Jan van Steewijk

CAMBRIDGE, Mass. -- Gyorgy Kepes, the painter, designer, author and educator who founded and directed the Center for Advanced Visual Studies, died on Dec. 29. A resident of Cambridge, he was 95.

"Gyorgy Kepes was the greatest pioneer in the marriage of art and technology in America, if not the world. He was a visionary, a towering intellect and a breathtaking artist. He single-handedly created the Center for Advanced Visual Studies at MIT and turned it into an internationally acclaimed program for the development of the finest in late 20th-century art. His work will endure for many centuries to come," said Alan Brody, associate provost for the arts.

Born in Selyp, Hungary in 1906, Kepes studied painting at the School of Arts in Budapest. The horrors of World War I convinced him that "only film could bring into a single focus my joy in the visual world and the social goals to be realized in this world," he wrote.

In 1930 he went to Berlin, collaborating on film, stage and exhibitions, and graphic design with Laszlo Moholy-Nagy, one of the principals in the Bauhaus movement.

Kepes came to the United States in 1937 as head of the Light and Color Department of the Institute of Design in Chicago, then known as the New Bauhaus. He joined MIT in 1946 as associate professor of visual design, becoming a full professor in 1949. He was appointed Institute Professor in 1970. Kepes founded the Center for Advanced Visual Studies (CAVS) in 1967 and served as its director until 1972.

The director of CAVS, Stephen A. Benton, the E. Rudge and Nancy Allen Professor of Media Arts and Sciences, said of Kepes, "He was one of the earliest faculty to be brought to MIT to widen its historical mandate into the visual arts. He was wonderfully articulate about the arts in general, as well as an important contributor to them, and communicated especially well with the MIT culture."

While World War I had convinced Kepes that some art forms were inadequate, World War II, he wrote, "virtually destroyed" his hope that any one person acting alone "could marshal his inner strength to take constructive action."

Noting repeatedly the alienation of artists from scientific advances and scientists, from basic "issues of how to see and feel the quality of the world," he sought ways to promote a sense of connectedness and belonging among them.

Kepes' vision for CAVS took shape in the 1960s. A community composed of both artists and scientists, he wrote, might be the way to "find some common denominator between the landscape open to the artist and that which is open to the scientist."

Researchers at CAVS have pioneered the use of technologies such as lasers, plasma sculptures, sky art and holography as tools of expression in public and environmental art.

In addition to his career as an artist and an educator, Kepes was a prolific author. He published "The Language of Vision," a summary of educational ideals and methods, in 1944; "The New Landscape in Art and Science" in 1956, and the seven-volume "Vision and Value" series in 1965 and 1966.

Throughout his career, Kepes continued working as a designer, producing both small and large-scale works. The First and Second Church in Boston commissioned him to make stained glass windows, and he designed a window and all sculpture for a church in Japan. His paintings are included in 30 permanent collections including the Brooklyn Museum, the Corcoran Gallery of Art in Washington and the Whitney Museum in New York City.

In 1995 the Hungarian government endowed a museum in Eger, Hungary, devoted to housing a major collection of Kepes' paintings, drawings and photographs as well as his archives. A permanent collection of his photographs is in Hungary's National Photography Museum.

The Kepes Prize is presented annually at MIT.

Kepes met his wife, the late Juliet Appleby Kepes, in 1936. He is survived by a son, Imre, of Pelham, Mass.; a daughter, Juliet Stone of Watertown; six grandchildren and a great-grandchild.