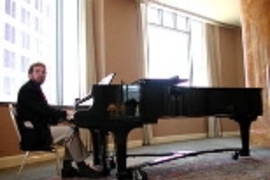 ↓ Download Image
Caption: Hawley at the piano prior to the 2000 Van Cliburn amateur competition

Caption:
Hawley at the piano prior to the 2000 Van Cliburn amateur competition

CAMBRIDGE, Mass. -- Michael Hawley of the MIT Media Lab, whose childhood piano teacher quit in disgust after just four lessons, was co-winner of the $2,000 first prize at the Third Annual International Piano Competition for Outstanding Amateurs .

Michael Hawley , a New Jersey native who resumed his piano studies in high school and attended Yale University on a music scholarship, shared the prestigious Van Cliburn award with Victoria Bragin, a professor of chemistry at Pasadena City College, Pasadena, Calif. Hawley also won the press jury award and the award for most creative programming.

As part of the first-place award, Hawley will perform in Ring Auditorium at the Hirshhorn Museum in Washington, D.C., Sunday (June 16) at 4 p.m.

Hawley was a finalist in the 2000 Van Cliburn competition and won the award for most creative programming that year.

"My dearest mentors were musicians," he said. "Music has made me a better person. It has helped me learn patience, perseverance, and how to reach people in ways beyond words. Music is a window to a better place, a sanctuary where there's harmony, beauty, and where we do things simply because we love them."

Hawley was "elated" by the awards and "overjoyed" by the experience of participating in the competition, a grueling yet exhilarating two-day round of back-to-back recitals that culminates in 30-minute performances for the finalists. The competition was held in Forth Worth, Texas, June 3-8.

"The feeling of being connected with an audience in such a way is indescribable. So rich, and powerful, so ephemeral -- and yet so utterly unforgettable," he said.

Hawley filled his half-hour final round with his own solo piano arrangement of the "Symphonic Dances" from Leonard Bernstein's "West Side Story" and Rachmaninoff's kaleidoscopic twist on "Liebesfreud," a waltz by Fritz Kreisler.

"I wanted to play a tremendous piece of American music in the final round, and there simply has not been any music that is more profoundly important to us than 'West Side Story.' No work of American music has touched us more deeply. And it was very much a New York story, about love and hatred -- so tragic and meaningful on so many levels," he said.

"The 'Symphonic Dances' were an orchestral transcription arranged as a concert suite, and there wasn't really a piano solo available for it. So I made one. For me it was a labor of love. During the quiet parts I could hear people in the front rows sobbing."

"When I was in high school, we did a production of it, which was unforgettable of course. But people forget that it wasn't just a musical -- it was a ballet with knife fights and street gang brawls. That feeling of movement is so alive in the music. And when I was on sabbatical in New York I lived on 66th Street at Broadway, right across from Lincoln Center. Most people don't know this, but before Lincoln Center was built, there was a tenement neighborhood with many Puerto Rican families there. As that area was being cleared, it became the set for the filming of the movie of 'West Side Story.'"

Hawley's program for his Washington recital will include the Bernstein, the Rachmaninoff transcription of Kreisler's waltz, and "a lot of Bach and Liszt."

Hawley credits Jon Quinn, his piano and organ teacher in high school; David Deveau, senior lecturer in music and theater arts at MIT, and his mentor at Yale, Ward Davenny, all "patient, passionate and devoted people" for helping his growth and curiosity through music.

Hawley, a one-time Duncan yo-yo champion, has been a principal investigator in two MIT Media Lab consortia: Things That Think and Toys of Tomorrow. Both focus on the ways digital media may infuse objects for ordinary use and play.