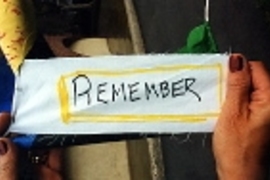 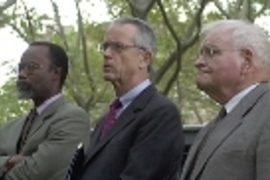 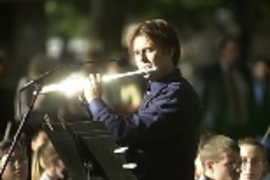 ↓ Download Image
Caption: Graduate student Ole Mattis Nielsen played an excerpt from Doppler's "Fantasie Pastorale Hongroise" during the Sept. 11 gathering's prelude, and the first movement of C.P.E. Bach's "Sonata in A minor" as pledges by living groups were read.

Caption:
Graduate student Ole Mattis Nielsen played an excerpt from Doppler's "Fantasie Pastorale Hongroise" during the Sept. 11 gathering's prelude, and the first movement of C.P.E. Bach's "Sonata in A minor" as pledges by living groups were read.

Several hundred members of the MIT community gathered on a windswept Kresge Oval last Wednesday to listen to words, music and prayer that conveyed sorrow and hope on the anniversary of the Sept. 11 terrorist attacks on the United States.

Leaves descended on the audience at dusk, as students, faculty and religious leaders shared their thoughts and the MIT Symphony Orchestra performed. The ceremonial centerpiece of the program was the veiling of the Reflecting Wall next to the MIT Chapel.

After welcoming remarks from the Catholic, Lutheran and Jewish chaplains, Chancellor Phillip Clay spoke about remembrance, and in doing so, named the eight MIT alumni who lost their lives on Sept. 11, 2001.

Clay was first to sound the prominent message of the program: that sadness and loss must be transformed into positive action. He spoke of the transformation from remembering those who died to actively honoring them.

"We honor the victims of 9/11, our country and the world when we seek to understand the world; practice tolerance, civility, and humanity; and when we pursue not only knowledge, but also the understanding that then guides our way in the world," Clay said.

Professor Paul Gray, president of MIT from 1980-90, urged the audience to set aside religious and cultural differences and instead celebrate a common humanity. He praised the efforts of the Muslim Students' Association for holding open Ramadan dinners last fall that allowed 500 members of the MIT community (including Gray) to learn more about the faith and the students who practice it.

"Today - Sept. 11, 2002 - is a day of remembrance," President Charles M. Vest said during his remarks. "But much more importantly, it is a day from which to move forward. We must recommit ourselves to being a campus, a community, a country that is open - open to new ideas, open to new people, open to each other.

"While you are here at MIT, take full advantage of the fact that here on this campus we are a world community. Learn from each other, respect each other, care for each other."

Built to resemble a large fragment of the World Trade Center, the Reflecting Wall has been a place for individuals to share their grief over the past year. The memorial's builders covered the monument with a giant swatch of light blue cloth that evoked a clear, empty blue sky.

Vest told the audience that the letters and other artifacts left by the wall had been collected and would be saved at the MIT Museum.

After the veiling was complete, the MIT Symphony Orchestra performed Ralph Vaughan Williams' "Rhosymedre," a pastoral piece that matched the weather and sentiment of the day.

Senior Jyoti Agarwal, a member of the Alpha Phi sorority, spoke about her experiences of a year ago. She told of the closeness she felt with peers and professors and the new friendships that she formed out of the sorrow. She also told of a desire to draw further positive outcomes from the tragedy.

"I noticed that in the year past, the idea of 9/11 has revolved around reflection and remembrance," said Agarwal, a chemistry major. "I realized that there should be such moments, but also strongly felt that this day should be used as a jumping point - a jumping point for action."

Agarwal announced a pledge by MIT fraternities, sororities and independent living groups each to undertake some form of active service.

"Take Sept. 11 and turn it into good. Use the privileges you have to help others. Go out into this community, this nation or even this world, and change it," Agarwal said.

Student representatives of the Muslim, Buddhist, Jewish and Christian traditions then offered prayers. As the crowd dispersed, the pledges of the living groups were read aloud. They include donations of food, clothing and blood; volunteer work at local homeless shelters; and commitments of money to various charitable organizations.