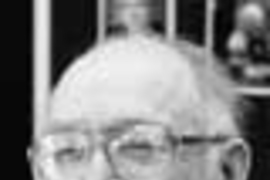 Professor Shull's prize was awarded for his pioneering work in neutron scattering, a technique that reveals where atoms are within a material like ricocheting bullets reveal where obstacles are in the dark.

When a beam of neutrons is directed at a given material, the neutrons bounce off, or are scattered by, atoms in the sample being investigated. The neutrons' directions change, depending on the location of the atoms they hit, and a diffraction pattern of the atoms' positions can then be obtained.

Understanding where atoms are in a material and how they interact with one another is the key to understanding a material's properties.

"Then we can think of how we can make better window glass, better semiconductors, better microphones. All of these things go back to understanding the basic science behind their operation," Professor Shull, then 79, said on the day of the Nobel announcement.

The Nobel citation noted that thousands of people now work in the field of neutron scattering, using the technology to study ceramic superconductors, the structure of viruses, surfaces of relevance to catalytic exhaust cleaning, and more.

University of Toronto President and former MIT Dean of Science Robert J. Birgeneau said in 1994 of the two Nobel winners, "Thermal neutron scattering has proven to be the most important single technique for elucidating the structure and dynamics of solids and fluids. Professors Shull and Brockhouse have made singular contributions which provide the essential foundations of the field."

THE FATHER OF NEUTRON SCATTERING

Professor Shull's pioneering work on neutron diffraction began about 50 years before he became a Nobel winner.

He started in 1946 at what is now Oak Ridge National Laboratory. At that time, he said, "Scientists at Oak Ridge were very anxious to find real honest-to-goodness scientific uses for the information and technology that had been developed during the war at Oak Ridge and at other places associated with the wartime Manhattan Project."

Professor Shull teamed up with the late Ernest Wollan, and for the next nine years they explored ways of using the neutrons produced by nuclear reactors to probe the atomic structure of materials.

In Professor Shull's opinion the most important problem he worked on at the time dealt with determining the positions of hydrogen atoms in materials.

"Hydrogen atoms are ubiquitous in all biological materials and in many other inorganic materials," he once said, "but you couldn't see them with other techniques. With neutrons it turned out that that was completely different, and we were very pleased and happy to find that we could learn things about hydrogen-containing structures."

As he refined the scattering technique, Professor Shull studied the fundamental properties of the neutron itself. He also initiated the first neutron diffraction investigations of magnetic materials. This yielded information about the magnetic properties of materials at the atomic level, opening up an entirely new field of study.

"If there is a 'Central Clearing House for Thermal Neutron Physics,' or a 'Father of Neutron Scattering' in the United States, it is Professor Shull," wrote Anthony Nunes (MIT PhD 1969), professor of physics at the University of Rhode Island of Professor Shull, in a biographical article published in 1986. Professor Shull was Nunes' thesis advisor at MIT.

A VALUED COLLEAGUE AND MENTOR

In his 1986 article, published in Physica, Professor Nunes went on to note that Professor Shull's "abilities as an experimental physicist are amplified and extended by his completely candid relations with coworkers" who "find him to be modest to a fault. He is very careful to 'give credit where credit is due,' usually citing originators of ideas even in casual conversation."

"I consider the intellectual stimulation, the unending optimism and the simple scientific fun of my student years with this man to be priceless," concluded Professor Nunes.

Professor Shull was the fourth member of the MIT physics faculty to receive the Nobel Prize in physics and the 15th present or former faculty member to receive a Nobel Prize. One staff member and 11 alumni also have won Nobels.

Professor Shull came to MIT as a full professor in 1955 and retired in 1986, though he continued to visit and to "look over the shoulders" of students doing experiments in the "remnants of my old research laboratory."

Commenting on his life at MIT, Professor Shull wrote, "I was attracted to MIT by the prospects of teaching and of training graduate research students at the soon-to-be-completed MITR-I research reactor on campus. The opportunity of being at MIT with its fine faculty and excellent students has certainly been most stimulating and satisfying."

Professor Shull's awards include the Buckley Prize, which he received from the American Physical Society in 1956, and election to the American Academy of Arts and Sciences (1956) and to the National Academy of Sciences (1975). In 1993 he received the Royal Swedish Academy of Sciences' Gregori Aminoff prize for his "development and application of neutron diffraction methods for studies of atomic and magnetic structures of solids."

Born in Pittsburgh, PA, in 1915, Professor Shull graduated from Schenley High School in Pittsburgh then received his BS from Carnegie Institute of Technology (now Carnegie Mellon University) in 1937. He entered Carnegie Tech to study aeronautical engineering, but after six months found himself drawn to physics. He received the PhD from New York University (NYU) in 1941.

Professor Shull is survived by his wife of 60 years, Martha-Nuel Summer; three sons: John C. of Texas, Robert D. of Maryland, and William F. Shull of South Carolina; and five grandchildren. One grandson, Craig M. Shull, received the SB degree in mechanical engineering from MIT in 1996.

A Memorial Service for Professor Shull will be held on Friday, April 6, from 1:30-3pm in the MIT Chapel at MIT, with a reception following the service in the Physics Reading Room at MIT, Building 26-152, from 3-4pm.

Other arrangements are being made through the Douglass Funeral Home, Worthen Road, Lexington, MA.