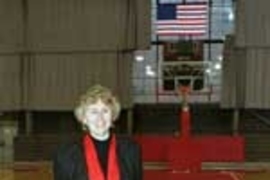 CAMBRIDGE, Mass. -- Candace L. Royer, a professor of physical education who has taught, coached and worked in sports administration at the Massachusetts Institute of Technology for 20 years, has been named director of athletics and head of the Department of Athletics, Physical Education and Recreation.

Professor Royer is the first woman athletics director at an Ivy League Plus school, a group that includes the eight Ivys plus MIT, Stanford and the University of Chicago.

As athletics director, she will oversee a Division III athletics program with 41 varsity sports (17 for women, 21 for men and three coed), including 10 sports that compete with some of the best schools in the nation (fencing, rifle and non-NCAA sports, such as crew, gymnastics and squash).

As head of the Department of Athletics, Physical Education and Recreation, she will manage a department that requires every undergraduate at the Institute take at least four courses. The department also offers physical education classes to all members of the MIT community, boasts 2,000 intramural sports teams and provides 41 club sports for students and other community members.

Professor Royer takes over at a time of change in the department. Financial cuts in recent years resulted in the dismantlement of the junior varsity teams. But construction recently began on the Institute's new $45 million sports and fitness center, which will bring additional space and new regulation-size facilities for some sports. The department is working on a new strategic plan.

It's also a time when the Institute is learning to work better as a community, searching for new ways to incorporate student life and academic education on one campus. Professor Royer, who is considered by students to be a "friend and ally," in the words of one, has plans for involving students in decision-making within athletics, a decision they welcome.

"This is a faith-restoring choice," said Ian McCreery, a senior in ocean engineering who is co-captain of the sailing team and co-chair of the Undergraduate Association's Athletics subcommittee.

The appointment was announced last week by Larry Benedict, dean for student life at MIT. Professor Royer replaces Richard Hill, who stepped down at the end of December after eight years as department head. "Candace Royer clearly emerged as the top candidate," Dean Benedict said. "Her diplomatic skills are outstanding. The breadth and depth of her contributions across the Institute are indeed commendable and were reflected in the very broad base of support she received during the search process."

"Professor Royer has been a real friend and ally to students in recent years, and her appointment to head the athletics department signals a recognition by the administration of the need for student-oriented leadership there," said Peter Shulman, a senior in mathematics who is president of the Undergraduate Association.

ONE OF FEW WOMEN

Of the nation's approximately 1,570 schools with a single director over both men's and women's athletics, only about 11 percent have a woman director, according to the National Association of Collegiate Directors of Athletics. Only six of those are at Division 1-A schools; none is at an Ivy League school.

The University of Maine at Orono is the only Division I school in New England with a female athletic director. Professor Royer is one of several women directors in MIT's conference (the New England Women's and Men's Athletic Conference). Others are at Clark, Smith, Mt. Holyoke and Wellesley.

Her decision to leave Penn State's Division I program, choosing MIT over both Duke and her alma mater, was based on her desire to be more heavily involved in education. "I love tennis both for the pure sensations of hitting the ball, as well as for the superb vehicle it is to teach young people about life, values, ethics and sportsmanship. At MIT I felt that the emphasis on education was compatible with my goals," Professor Royer said.