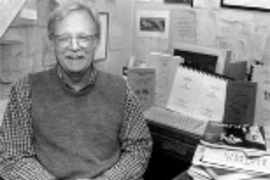 CAMBRIDGE, Mass. -- Kenneth Locke Hale, a professor of linguistics at the Massachusetts Institute of Technology known for his lifelong dedication to the study and preservation of endangered languages, died in his home in Lexington, Mass., on Monday, Oct. 8. He was 67.

Hale, who came to MIT in 1967, was internationally renowned for his ability to quickly learn and communicate in dozens of diverse languages.

Institute Professor Noam Chomsky, a colleague during the MIT years, responded "with inexpressible sadness and distress," he said, to the news of Hale's death.

"Ken Hale was a close and cherished friend for many years, a colleague whose contributions are incomparable and of immense intellectual distinction, and above all, a person of honor and courage, who dedicated himself with passion and endless energy to protecting the rights of poor and suffering people throughout the world. One of the world's leading scholars, dear to countless people, he was also one of those very few people who truly merits the term 'a voice for the voiceless.' The loss is immeasurable," Chomsky said.

Throughout his career, Hale sought to obtain training in linguistics for the native speakers of indigenous languages. Hale felt that the study and preservation of native languages should be conducted by members of the affected culture, in addition to outsiders. Two of his graduate students at MIT -- Paul R. Platero, a Navajo, and LaVerne Masayesva Jeanne, a Hopi -- are believed to be the first Native Americans to receive doctorates in linguistics.

In a paper entitled "The Human Value of Local Languages," Hale wrote,"The loss of local languages and of the cultural systems which they express, has meant irretrievable loss of diverse and interesting intellectual wealth. Only with diversity can it be guaranteed that all avenues of human intellectual progress will be traveled." In an interview in 1995, Hale said, "When you lose a language, a large part of the culture goes, too, because much of that culture is encoded in the language."

"Ken viewed languages as if they were works of art. Every person who spoke a language was a curator of a masterpiece," said Samuel Jay Keyser, MIT professor of linguistics, emeritus, and a close friend and colleague of Hale for over 20 years.

Keyser emphasized that Hale was one of the most significant linguists in the world and also, a man of grace and humility who believed that speaking to a person in his or her own language was above all, an act of courtesy.

"Many people have that ability to gain near-native command of language, but few have Ken Hale's theoretical imagination. I was constantly mesmerized by his creativity," Keyser said.

Philip S. Khoury, dean of the School of Humanities, Arts, and Social Sciences at MIT, recalled Hale's expertise and good humor. "Ken Hale was a giant in linguistics and a great, compassionate human being. He had the ability to learn and speak languages by the dozens and he did. Once I asked him about this, and he said, 'the problem is that many of the languages I've learned are extinct, or close to extinction, and I have no one to speak them with!'" Khoury said.

Hale's theoretical interests focused on the cross-linguistic study of language universals -- that is, he studied as many structurally diverse languages as possible in order to discover laws governing them all.

Sabine Iatridou, a professor of linguistics at MIT and a colleague of Hale, explained, "The idea is that if a particular phenomenon holds in a variety of languages, chances are it is reflection of what is called Universal Grammar, the properties of human language proper, not a result of accidental or historical reasons. A lot of theoretical linguistics relies on finding generalizations that hold across languages that are genetically unrelated."

Over the course of his long, passionately disciplined and devoted career, Hale contributed significantly to the development of a general theory of the human capacity for language, his colleagues agreed.

"Ken was the world's foremost crosslinguistic linguist. His knowledge of language and languages was legendary. Many of his hypotheses over the years had borne fruit, remarkable fruit, in fact. He also spearheaded many projects about endangered languages, all over the world. Just about every theoretical linguist teaching in this country was in some way or other a student of Ken's," Iatridou said.

A NEW HOME ON THE RANGE

Following the sudden death of his grandfather when he was six, Hale's family moved from Chicago to a ranch in Canelo, Arizona. There, Hale's pursuits included trapping and gunsmithing. He attended grade school in a one-room schoolhouse that he reached on horseback each day.

Hale's interests in language blossomed in 1948, when he was sent to the Verde Valley School in Sedona, Arizona. There, according to Keyser, "Ken first roomed with a Hopi boy and learned Hopi, then with a boy from Jemez, and learned Jemez. He had to figure out a way to write the languages since there was no writing system for them.

"I learned faster by working on more than one language at a time," Hale said, moving quickly on, in Tucson High School, to studying Navajo, O'odam, Pachuco, Polish and whatever else came along.

With characteristic passion, Hale also enjoyed rodeo bull riding. During his undergraduate days at the University of Arizona, he divided his time between weekend "jackpot" rodeos and studying anthropology and Native American languages. In his senior year, he won the bull-riding event in the University of Arizona Rodeo, and wore the trophy belt buckle for the rest of his life.

Hale also taught a course on Walbiri literacy for Walbiri-speaking teachers in the Yuendumu School in Central Australia (1974) and a course on Navajo linguistics in Kinlichee, Arizona (1975).

From 1985 until the present, Hale made many trips to the Atlantic coast of Nicaragua, to mentor native linguists in four indigenous languages of the region. During the last five summers of his life, Hale taught for, and served on the board of directors of, the Navajo Language Academy. He was also actively involved with the language revitalization project of the Wampanoag tribe in New England.

A memorial for Professor Hale will be held at MIT on Thursday, Nov. 1 at 2 p.m. in the Wong Auditorium. Burial will be private.

Donations in Hale's memory may be sent to the Navajo Language Academy, Attn: Peggy Speas, Treasurer, Department of Linguistics, University of Massachusetts at Amherst, Amherst, Mass., 01003.