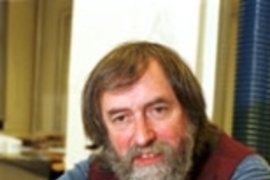 Caption:
Professor of Architecture Jan Wampler shows an architectural model of the microvillage he and students designed for an area of rural Turkey hit hard by last year's earthquake.
Credits:
Photo / Laura Wulf

A group of MIT student architects has designed a "microvillage," a 50-unit housing complex and job center to be built with the help of Habitat for Humanity International and Mercy Corps International in the region of Turkey hardest hit by last summer's earthquake.

As envisioned by the project's founder, Professor of Architecture Jan Wampler, the microvillage is "a new type of community concerned with renewable resources, suitable land, locally produced materials, and most importantly, the values and dreams of the people who will live there," he said.

The $1.5 million, two-story housing complex will be built with the help of the families who will own homes in the village, and will include community centers that could serve as the locus for micro-industries such as marketing handmade goods and possibly even constructing roof trusses for similar villages to be built nearby in the future. The village's common buildings will be equipped with digital communication lines suitable for use with the Internet, so that the web can serve as an educational resource for residents.

The key to making the microvillage a success lies in its sustainability. It will be constructed of sustainable materials such as locally farmed wood, use windmills and solar energy as power sources, collect rainwater in reservoirs for drinking, and treat sewage for use as fertilizer. In addition, the village will provide attractive, permanent living space designed to meet the needs of its Turkish homeowners, and will furnish jobs and skills training for some residents so they can sustain their families in the village outside the urban center.

"The urban area has been seen as the mecca, the place to go to learn. But cities around the world can't support the people moving in," said Professor Wampler, who wants to improve village life so people can earn money without migrating to cities.

"It's clear that when people move to the city, the majority of them don't have a better life. They might have a little money, but no food or shelter," he said.

The village will be run as a cooperative, with collective ownership of the community center and individually owned housing units. Families will be required to participate in training courses to learn about cooperative principles, organization function and member obligations.

Potential owner-members must demonstrate the ability or future ability to pay a mortgage on their unit, and must contribute at least one family member over age 18 to be involved full-time in building the village. That involvement may be in the form of carpentry and construction work, or cooking, childcare and other services for workers.

Turkish authorities have asked Professor Wampler to design several similar projects both in the earthquake-hit area of Turkey and in the eastern portion of the country. He envisions a consortium of villages connected electronically.

"In the past, people leaving the rural areas have had to choose urban housing, as in Turkey, or suburban-ization, as in the United States. I see this as a new model," said the architect.

When the earthquake hit on August 17, 1999, many people were living in high-rise concrete apartment buildings that were destroyed. About 15,000 people died in the earthquake, which measured 7.4 on the Richter scale. Another 25,000 were injured and 120,000 households were damaged beyond repair; 600,000 people were left homeless. Many of those people are still living in tent cities or other temporary housing.

Hearing of the devastation, Professor Wampler quickly set about finding a way to get involved, and with the help of two MIT architecture alumnae living in Turkey, Rukiye Devres and Barbara H. Brady, he set up the project as an intensive design course for MIT students.

Professor Wampler, who recently received MIT's Irwin Sizer Award for the Most Significant Improvement in Education, has done similar projects in other developing countries such as Honduras, where he and his students designed multistory walk-up housing following the 1999 hurricane there.

In April, the group presented their microvillage design to Istanbul authorities and local leaders in Adapazari, the town outside which the microvillage will be built. Their enthusiastic reception was documented in two favorable articles in major newspapers in Istanbul, the Millivet (May 3) and the Radikal (May 4), and on local TV news. Construction is scheduled to begin this summer and should be completed in about six months.

Mercy Corps International, an American nongovernmental organization, will help raise funds and manage the project, and Habitat for Humanity International also will be a partner. Civil engineers from Sakarya University near Adapazari will provide technical expertise, and Ms. Devres and Ms. Brady will serve as project coordinators.

"I'm very excited about this team of outstanding organizations. Both Habitat and Mercy will bring to the project a very human understanding, in addition to financial and managerial support," Professor Wampler said.

MIT students involved with the design are graduate students Bianca Maria Nardella, Steven Jackson, Alexandra Jacobson and Bruno Miller, and just-graduated seniors Lucy Fang, Minna Ha, Monique Lo and Hector Martell. Funding for their travel was provided by MIT's Department of Architecture, the Aga Khan Trust for Islamic Architecture and the Ernest A. Grusfeld Memorial Fund, as well as by private donations from Turkey.