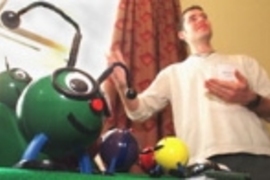 The play was the thing at "Thinking Outside the Toybox," a research consortium on toys and technology presented by the Media Laboratory's Toys of Tomorrow group on May 23.

"Outside the Toybox" brought together Media Lab researchers and faculty, toy designers, social scientists, toy retailers and toy buyers to address issues related to toy development, technology and interactivity. "Toybox" also included plenty of new toys so participants could experience the ways that play itself is evolving.

In her opening remarks, Justine Cassell, the AT&T Career Development Associate Professor at the Media Lab and a faculty organizer of the event, noted that the interplay of toy-making, play and technology is viewed ambivalently by the adult world.

"New technological toys are seen by some as Trojan horses, bringing undesirable new technology into the home. Or these toys are equated automatically with educational benefits, which in fact they may not bring. As technologists, as toy designers, as academics working on childhood, and as buyers and retailers, we must be critically interested in the role of technology in toys," she said.

"In the past, new technologies were born in the workplace and ended up in toys. Today, toys are often the trend-setters. What's more, the consumers of today's toys becomes the producers of the toys of tomorrow," Professor Cassell said.

At its height, "Outside the Toybox" worked like a giant play-date for grownups, with participants chatting with Media Lab students and researchers as well as trying out their devices in parallel-play mode.

Michael Hawley, the Alex Dreyfoos Jr. (1954) Career Development Assistant Professor of Media Technology, introduced a panel of Media Lab researchers who in turn described their work before letting the group out of the box.

Tod Machover, professor of music and media at the Media Lab, presented slides of his work in music and music-based play. Professor Machover is working on establishing his Brain Opera in its new permanent home in Vienna, and also on a novel collaboration called the Toy Symphony involving renowned violinist Joshua Bell, an adjunct professor at the Media Lab; Sega; orchestras including the Berlin Philharmonic, NHK (Tokyo) Symphony and Boston Symphony; and children around the world.

Professor Machover's fanciful "Big Thing," a seven-foot-tall Zoobers-and-Tots sculptural music-maker, is one of the new instruments in Toy Symphony.

Other Toys of Tomorrow researchers who presented their work and shared their toys included Bruce Blumberg, assistant professor in the Synthetic Characters group, whose animatronic dog head, Rufus, has big eyes to follow you around with; graduate student Rick Borovoy of the Lifelong Kindergarten group, whose I-Balls look like Game Boys but feature folk games that can be shared and altered infinitely among "authors;" graduate student Kimiko Ryokai, whose StoryMat tells a previously told recorded tale each time a stuffed animal passes over a spot on the map; and graduate student Michael Ananny, whose charming bug-eyed, bug-bodied TellTale can record and play back individual segments of a continuous narrative. TellTale's midbelly will "hold" a dramatic moment which can be switched to the opening ("head") or closing ("tail") of the story, depending on the child's sense of logic or suspense.

Some of the toys radiated a soft, otherworldly light -- Nami, a cluster of irridescent orbs, and Physical Pixels, a stretched-out set of Rubik's Cubes, both changed colors and seemed to glow happily in response to human touch -- while others illuminated the inner life of computers. Research specialist Timothy McNerney patiently snapped together a set of Programming Blocks to demystify programming.

Visiting Associate Professor Irene Pepperberg is working with an African gray parrot, Wart, who will learn to select a "nice" image on a screen to ease loneliness. Professor Pepperberg and other researchers raise questions such as whether a parrot can be taught to use a web browser or learn to manage currency. As these and other questions came to light during "Outside the Toybox," so did the derivation of the media-literate parrot's name. He was named Wart, said Professor Pepperberg, to recall the humble boyhood of King Arthur -- the once and future king.

Three panel discussions pondered questions such as "how have children's play patterns changed due to the influence of interactive toys?" "how do we address the 'technology gap' between parents and children?" and "how do gender and licensed content affect toy design and toy play?"

Toy design and development companies represented on the "Outside the Box" panels included LEGO, Neurosmith and Mattel.