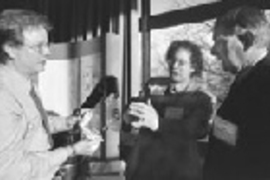 Caption:
The TLO Licensee Convocation included a fair to highlight inventions developed at MIT. Former PhD student Bill Townsend (left), who developed WAM (the Whole Arm Manipulator), talks with Rony Abovitz (center) of Z-Cat Medical Robotics, to which he sold technology for use in operating rooms, and Sam Pasternak of the law firm of Choate, Hall and Stewart.
Credits:
Photo / Donna Coveney

Professors Richard Hynes, director of the Center for Cancer Research, described ways in which genome sequencing will lead to the prevention and treatment of disease. Comparing the genome to an encyclopedia set, he said each of the four chromosomes would be a volume, and each gene a chapter in a volume.

He estimates that scientists will have a "working draft" of the human genome by late this year, and a complete sequence by 2003. Sequencing of the mouse, an animal important to medical research, will follow, with a draft expected by 2003 and the full genomic sequence by 2005.

The sequencing of two organisms&emdash;the fruit fly Drosophila and the nematode, C. elegans&emdash;has been completed already. Fruit flies are especially useful animals for gene research because they're easy to grow in large numbers, making it easier to study genetic mutations, he said.

In his overview of the hottest areas in materials science and engineering, Professor John Vander Sande of materials science and engineering pointed out that the use of materials to classify stages in human evolution&emdash;the Bronze Age, the Iron Age, etc.&emdash;continues to be an appropriate means of categorization. "Materials are crucial to the forward movement of technology," he said.

He described our world as one in which materials are made on demand with the appropriate characteristics and properties to perform as needed. In general, he said, the need is for materials to be light, inexpensive to manufacture, environmentally sound and, above all, small.

Professor Douglas Lauffenburger, co-director of the Division of Bioengineering and Environmental Health, described activity at the interface of the two fields: bioengineering.

He used the example of bone, which he said has been treated in the past as a conventional material. When damaged, it is mended with metal pins or by other traditional means. But biology tells us that bone is a dynamic, living multicellular system and scientists are now learning to control cell functions in that system with the use of material agents such as drugs, he said.

Engineers are beginning to create special materials that can be inserted into damaged bone to provide the right architectural structure for regrowth. These materials can be treated with a chemical, such as a growth factor, to affect cell function.

Professor Lauffenburger described another field, gene therapy, as "very promising but very problematic." While the field currently relies on viruses as gene vectors, he predicts that within the next two decades, materials scientists will be able to create synthetic materials that will mimic virus properties in a safer way.

In these areas, he said, we're still in the "Neanderthal stage" of development, but "we're starting to see a glimpse" of what's possible.

If Tim Berners-Lee, "father of the World Wide Web," has his way, his baby will get much more proficient at gathering and correlating data and providing trustworthy information.

Dr. Berners-Lee (director of the World Wide Web Consortium at MIT's Laboratory for Computer Science), Professor Brooks (director of the Artificial Intelligence Laboratory) and Professor Grimson, associate director of the AI Lab and the Bernard Gordon Professor of Mechanical Engineering, spoke at the first Convocation of Licensees, sponsored by the Technology Licensing Office (TLO) on March 30. Their topic was hot trends in communications and robotics.

Contrary to people's perceptions, Dr. Berners-Lee said, the web is far from technically complete. While the web is good at presenting data to humans, it's not so good at making data available to machines in a form they can find and manipulate. The limitations of the web language HTML prevent computers from running a program that correlates, for instance, the temperature at various corporate headquarters. The information is out there, but no software exists to let a web surfer gather the data in a format he or she might want.

Dr. Berners-Lee is working on the next generation of web communication, which seeks to ensure that machines can exchange data with each other as well as provide user-friendly pages and ways for people to communicate.

Right now, he said, there is a threat of fragmentation. He tried to look at information at one university's site, he said, but needed all sorts of add-ons to open it. And it's unlikely that libraries of the future will be able to access such data. Universality is key, he said. "You should be able to link from anything to anything. The web must be able to embrace information of all sorts, beyond language, culture or whether the site is polished or casual."

Once the web has a "global search" feature, the results of a query will be much more accurate. "Each of the things returned [from a web search] can be logically checked for proof that the two are related and compatible," Dr. Berners-Lee said. Thus, with the addition of what he calls a "digital signature" that guarantees a user's identity, "we can construct not just a web of logic but also a web of trust."

COMPUTERS OF THE FUTURE

The five-year Project Oxygen led by the Laboratory for Computer Science and the AI Lab aims to "make computers more aware of us, and come out into the human world to understand what we're doing, " Professor Brooks said. "Oxygen is people-centric, not device-centric." In the process, by some estimates, human productivity may increase 300 percent.

Using techniques borrowed from a variety of disciplines, Oxygen has developed the Handy 21, a handheld unit that includes an antenna, speaker, microphone, camera and a whole lot of software. It can be a cell phone, TV receiver or short-wave radio as the need arises. "Pick one up and it becomes yours," Professor Brooks said. It is designed to belong to anyone, but will only provide private information to a user who proves his or her identity.

Another device, the Enviro21, is a stationary unit built into offices, homes or cars. It enables the space to "understand what we are doing" and provide assistance. For instance, a wall can take the place of a computer screen. People can talk directly to the computer and it will understand and provide information.

Professor Brooks would like to see the new Ray and Maria Stata Center for Computer, Information and Intelligence Sciences "infiltrated" with Handy21 and Enviro21. He even wishes they could bar keyboards from the building, but he admitted that not everyone was ready for that.

Professor Grimson tells surgeons that he wants to turn them into Superman by giving them X-ray vision&emdash;the ability to see inside a patient and plan a surgery before picking up a knife.

To do this, he has developed technology that builds a computer model of the patient. Using data from magnetic resonance, tomography scans and other sources, he creates a three-dimensional image of the patient's skull, brain and blood vessels. If the patient has a tumor, it shows up in bright green on the image, which the surgeon can study and rotate in space as he or she plans the surgery. These methods have so far been applied to spine, knee, abdominal and brain surgery, prompting one neurosurgeon to say that the tools take three hours off an eight-hour operation.

While the surgery is under way, the physician's entry into the skull is depicted in real time so that he can track his movements on the screen. Another device allows the surgeon to remote control a very small robotic hand. It provides feedback that allows him or her to "feel" the patient's tissue as the hand works.

As one surgeon put it, these tools will help build the "Nintendo" surgeon of the future who is totally at ease with augmented visualization and robotically assisted hand-eye coordination. "These tools amplify surgeons' basic capabilities and help them do what they do better," Professor Grimson said.

A version of this article appeared in MIT Tech Talk on April 5, 2000.