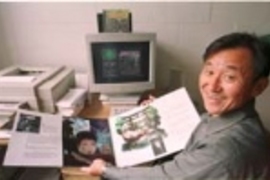 ↓ Download Image
Caption: Professor Shigeru Miyagawa shows his new StarFestival CD-ROM and book. The program is based on his experience as a child immigrant from Japan, trying to live in two worlds.
Credits: Photo / Donna Coveney

Caption:
Professor Shigeru Miyagawa shows his new StarFestival CD-ROM and book. The program is based on his experience as a child immigrant from Japan, trying to live in two worlds.
Credits:
Photo / Donna Coveney

Dr. Shigeru Miyagawa, the Kochi Prefecture-John Manjiro Professor of Japanese Language and Culture, has built a virtual new world inspired by his boyhood experiences of alienation as a newcomer to the United States and by his adult experiences as a teacher, world traveler and designer of educational technology.

This virtual world is called "StarFestival," an interactive, multimedia CD-ROM program for children in grades K through 12. StarFestival explores the specifics of Professor Miyagawa's personal life and family history in Japan.

The Miyagawa family moved to the US when the professor was 10 years old. He recalls vividly his feelings of loneliness, confusion and self doubt as a young teenager in Durham, NC and Tuscaloosa, AL. The educational goal of StarFestival is to help young people explore personal and general issues relevant to immigration and bicultural identity.

"You see kids struggling with this split: I want to be an American, but I don't want to give up my identity," said Dr. Miyagawa, who is also a professor of linguistics and foreign languages and literatures. He believes the message of StarFestival will resonate with American students, no matter where they're from. "I want any of the kids to come away knowing it's OK to come from two places," he said.

As students progress through the program, Professor Miyagawa's experiences, ranging from "painfully autobiographical" to humorous to poignant, invite deeper understanding of Japanese culture and more general curiosity about a student's own roots.

StarFestival, which is narrated by George Takei (aka Mr. Sulu of "Star Trek"), earned Best of Show honors at the 1997 MacWorld Exposition. The CD-ROM, which has been upgraded to run on PCs and Macs, is accompanied by a detailed curriculum produced by the Boston Children's Museum. Last spring, 80 schools throughout the US implemented pilot educational programs about StarFestival. The whole program has been adopted by the Boston Public Schools for use in all 210 first-grade classrooms for the school year 2000-2001.

Commenting on behalf of the Boston Public Schools, Deborah Washington, senior program coordinator for social studies, said, "New standards in the Commonwealth of Massachusetts in history and social studies have made it necessary for [us] to engage students. Everything I would want to happen in a classroom -- inquiry, reading, discovery and comprehension -- takes place in the StarFestival program."

Professor Miyagawa's two worlds come together in StarFestival, and bringing his world into a classroom where students like himself may be wondering, "Who am I? Am I American or Asian? American or Russian?" is a dream come true, he said. "I wanted to use my own life to communicate to young people certain things about cultural identity. I lived the first 35 years of my life struggling with who I am," he said.

"StarFestival illustrates the powerful potential for collaborations between humanistic expertise and high technology to revolutionize what takes place in our schools," said Professor Henry Jenkins, the Ann Fetter Friedlaender Professor of Humanities and director of the Comparative Media Studies Program. "The project is flexible and substantive enough to be used by students at all levels -- from kindergarten to college. We are all very proud of what Shigeru Miyagawa has been able to accomplish here and hope that it sets a standard for future MIT projects in humanistic computing."

"Shigeru Miyagawa's StarFestival project is absolutely relevant to the new cultural and linguistic realities of our schools," said Professor Isabelle de Courtivron, head of foreign languages and literatures and director of the Center for Bilingual/Bicultural Studies at MIT. "It responds to the national need for young people to become more familiar with the global realities in which they are living; secondly, it addresses the identity issues of an increasingly large number of students whose primary language, spoken at home, is not English yet who do not want to face a conflict between assimilation and retaining their family's language and culture; thirdly it does this by using the most sophisticated and appealing educational technology."

The development team for the CD-ROM included graduates of the Media Lab, Center for Advanced Visual Studies, and EECS. A demonstration of the CD-ROM may be viewed on line.

A version of this article appeared in MIT Tech Talk on August 23, 2000.