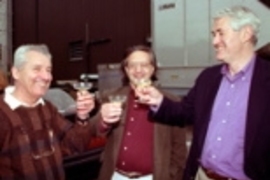 A head-on collision between gold nuclei travelling at nearly the speed of light produced a blue spray of subatomic particles on a computer screen at Brookhaven National Laboratory and a bright ray of hope for physicists at MIT and other institutions studying the state of matter immediately after the Big Bang.

The crash of the nuclei was created by Brookhaven's atom-smasher, called the Relativistic Heavy Ion Collider (RHIC), on June 12. The huge collider aims to recreate the conditions of the early universe a tiny fraction of a second after the Big Bang. Matter at that moment was so hot and dense that atomic nuclei did not exist; only their component quarks and force-carrying gluons were present, forming a soup-like quark-gluon plasma. In the Brookhaven collider, collisions between nuclei travelling at almost the speed of light will fleetingly attain energy densities not seen since that time.

After the Big Bang, the quark-gluon plasma quickly cooled, resulting in the discrete particles that make up ordinary matter. In the present universe, quarks are never found by themselves; they occur only as hadrons -- bulky packages of two or three quarks held together by gluons. The RHIC subatomic collisions aim to blow those packs back to their original hot, dense and soupy state.

Through the RHIC experiments, scientists hope to be able to gather definitive evidence that quark-gluon plasma was formed and to understand its properties.

"We are excited, relieved and slightly tired," said Wit Busza, the Francis Friedman Professor of Physics and a MacVicar Faculty Fellow. "It is very important that we identify that moment and that we show that we have compressed normal matter so much that it produced the plasma."

RHIC produces its collisions and, physicists believe, plasma by stripping gold atoms of their electrons, boosting their energy, and using electric and magnetic fields to rev them up to almost the speed of light. Once this is achieved, the nuclei are sorted into two bunches, sent down a 2.4-mile pipe in opposite directions, further accelerated and smashed together at four different points along the RHIC oval track.

Each head-on collision between the gold nuclei spews thousands of exotic particles, and detectors are situated at four of RHIC's collision sites to gather and decipher the enormous volumes of data generated by the crackups. There are two large detectors, STAR and PHENIX, and two small ones, PHOBOS and BRAHMS. The four vary in their approaches to tracking and analyzing particles' behavior.

Professor Busza is the founder and spokesperson for the PHOBOS detector project, initiated in 1992 at MIT. MIT's Heavy Ion Group, which includes Professor Busza, Assistant Professor Gunther Roland, and Associate Professors Leslie Rosenberg and Bolek Wyslouch, is the lead institution in the PHOBOS project. Professor Wyslouch is the project manager.

"With RHIC, we are making an analogy to what happened just after the Big Bang. We are replaying history to study the process of transition similar to a phase transition that occurs when water vapor turns into fog," said Professor Busza. "And it's a relief to know the equipment works to do that. But we still had to show that the events occurred and analyze what happened. Thanks to an international team of scientists and to strong support from the Laboratory for Nuclear Science, the physics department and the School of Science, we succeeded with PHOBOS."

PHOBOS is an $8 million collaboration between the United States, Poland and Taiwan involving 50 physicists and 25 engineers and technicians. As described by Professor Busza, the core of the PHOBOS detector is state-of-the-art-technology "about the size of an MIT office desk."

PHOBOS, named after one of the moons of Mars, is designed to "examine many, many collisions and study in detail the results from a small fraction of them -- in particular those produced by the most violent collisions," said Professor Busza. "The MIT idea was to do it on a small scale."

STAR, a detector about the size of a three-story house, is designed to look at a smaller number of events with greater detail. The June 12 celebration at Brookhaven was set off by the bright blue fireworks display produced by STAR and by evidence of the first 1,000 collisions detected by PHOBOS.

"We've got a lot of fragments; we've got evidence and we agree the nuclei collided. Now we have to infer what happened. This is just the beginning of our research," said Professor Busza.

As for the next steps in the field of quark-gluon dynamics, RHIC's oval-track shape gives a hint. Nuclei will be given more energy, higher-energy densities will be created and our understanding of how the universe began will grow.

"Today RHIC collides nuclei with 30 GeV [billion electron volts] per nucleon. Soon it will be three times that -- 100 GeV per nucleon. Also, we want to record more collisions. We've seen a thousand; we want to look at a billion," said Professor Busza.

Professor Busza acknowledged the support of Robert Birgeneau, former Dean of Science, in arranging significant early funding, in addition to the MIT faculty.

PHOBOS and RHIC are funded by the US Department of Energy.