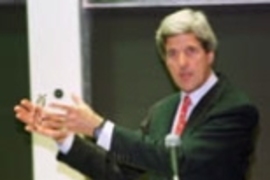 Workshops were designed to help participants build a sustainable community among themselves.

MIT Chancellor Lawrence S. Bacow welcomed the enthusiastic "green" group to MIT, noting in a swift overview MIT's "long-standing commitment to the environment and to sustainability that is represented in our teaching, research and administration."

"The challenge now is to ensure that we incorporate principles of sustainability in the education of every scientist, engineer and manager trained at MIT," he said.

Sen. Kerry expressed outrage at the impact of money on American politics and exhorted forum participants to confront how lobbying thwarts policy changes essential to sustainable development. Noting his own background in the anti-Vietnam War movement and in the early "Earth Day" era of 1970s environmental activism, he also directed the group's attention to challenges ahead.

"Education is the key," he declared, to creating that "great sustainable circle" so that both individuals and groups instinctively and automatically think of linkages among, say, open space, housing, energy policy and transportation.

Sen. Kerry warned forum participants of the drain on civic life and environmental awareness caused by the current boom. A "reluctant electorate, seduced by good times and uninformed by a celebrity-oriented media" cannot function as "good citizens," he said.

Making the environment a "voting issue" and de-coupling the image of environmental protection from higher taxes or job loss are pressing political issues, he said.

"Sustainable development is not a zero-sum game for the economy. We can create more jobs and expand growth to make life livable," Sen. Kerry declared.

"We've made significant changes. In the 1970s, there was no EPA, no Clean Water Act. But standards don't measure where we've been, but where we need to get to. There's a gap in here that disturbs everyone here.

"And that gap will be hard to close. The 1970s were easy -- rivers were burning. This is hard. We've got 500 channels. Families are dispersed. I leave you with a sense of urgency to stand up to the sneak attacks, the stealth efforts, to undo the contract with America," he said.

Mr. Durand declared with pleasure, the "proudest moment of sustainable development in this area came just two weeks ago when Governor Paul Cellucci signed into law the Community Preservation Act. Community by community, watershed by watershed, this act will provide funds so that master plans to preserve open space can be realized."

STATE OF THE STATE

A lunchtime panel, "The State of Regionalism and Sustainable Development in Massachusetts," included Mr. Shutkin; Caesar McDowell, director of the Center for Reflective Community Practice at MIT; and John DeVillars, executive vice president of Brownfields Recovery Corporation and a lecturer in the Environmental Policy Group of DUSP.

Mr. McDowell drew a parallel between the goals of the civil rights movement and those of the movement for sustainable development.

Referring to Bob Moses, voter registration worker in Mississippi in the 1960s, Mr. McDowell said, "If you ask Bob Moses to name the most important thing to come out of the civil rights movement, he says, 'Space for people to meet.' This space nourished two new things among the sharecroppers in Mississippi: the ability to make a demand on the system and the ability to make demands on themselves such as to walk up to city hall and register to vote.

"Our urban communities are in transition. The people who live there now may not be there in five years. Cultures are shifting and economies are shifting. How can we create space for people in those communities to make demands on the system and on themselves?

"The lessons we can draw from the civil rights movement are first, we really have to believe in local knowledge. It is not enough to say things have to be different. We need to accept what people can realistically do. And, second, we must not rob people of their pride in what they have and in who they are. As we build sustainable communities, we must respect that," said Mr. McDowell.

Mr. DeVillars called upon three "spheres of influence" -- private business, especially those who control investment capital; community leaders; and those who control public capital -- to meet the needs and challenges of sustainable development.

A version of this article appeared in MIT Tech Talk on September 27, 2000.