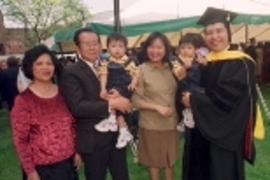 The investiture of doctoral degree hoods changed venue this year. The traditionally boisterous, family-oriented ceremony filled Johnson Athletic Center instead of Rockwell Cage, providing better views from the bleachers of the MIT faculty in their heraldic finery and of the 362 graduates as they each received a handshake and a long yellow (doctor of science) or blue (doctor of philosophy) hood.

"I bring congratulations to all who will receive hoods and thank you to everyone who supported these young men and women in their work," President Charles M. Vest said in his greeting. "I can imagine no pinnacle higher than a doctoral degree from MIT and we all look forward to the accomplishments ahead.

"In the spirit of family, I want to be particularly mindful of Kazunori Tanaka, the son of our good colleague Toyoichi Tanaka, MIT professor of physics, who died recently. We wish that this event may bring some measure of joy and a sense of renewal and forward movement for you and your family," said President Vest. Kazunori Tanaka received the PhD degree in physics.

In keeping with the annual event's mix of levity and decorum, President Vest invoked his predecessor, former President Jerome Weisner, and his weighty advice to those lining up to receive their freshly minted doctorates: "Keep on moving, keep on moving."

Chancellor Lawrence S. Bacow welcomed the crowd with an explanation of the academic regalia displayed by various MIT faculty members, singling out for applause the "beautiful blue robe of Yale" worn by Samuel J. Keyser, professor emeritus of linguistics; the "florid robe" of Stanford, worn by Professor Rodney Brooks, director of the Laboratory for Artificial Intelligence; and the "piï¿½ï¿½ce de rï¿½sistance," the elaborate robes, complete with ermine mini-cape and green satin sleeves denoting physics, of the University of Padua in Italy, worn by Professor Paola M. Rizzoli, MIT director of the MIT/Woods Hole Institute Joint Program in Oceanography.

Chancellor Bacow was the investor of the hoods. He was assisted by Dean for Graduate Students Isaac M. Colbert and a faculty representative from each department. The name of each recipient was read by Professor Keyser. Music was provided by the Mass Brass Quintet.