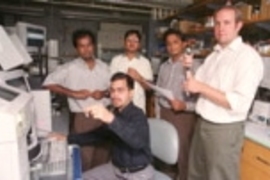 MIT scientists and colleagues recently announced work that could impact the multi-billion dollar heparin industry and change how the FDA regulates that common anti-clotting drug. The work is the first application of a novel analytical tool announced by the same core group of researchers last fall. Other important applications promise to follow.

"Periods of great discovery in science are almost always preceded by the development of new tools," writes Professor Matthew A. Nugent of Boston University in the September 12 issue of the Proceedings of the National Academy of Sciences. His commentary accompanies two articles by the MIT researchers describing the heparin work.

The new analytical tool probes the mysterious world of complex sugars. Although these compounds have recently been shown to play important roles in processes from viral infection to tissue development, "the field has lagged far behind the mainstream work on proteins and DNA," said Ram Sasisekharan, an associate professor in the Division of Bioengineering and Environmental Health (BEH) and leader of the MIT team.

That's because the complex sugars have many more building blocks than their better-known cousins, DNA and proteins, making them more difficult to study. The MIT tool is a quick, easy way to determine the structure, or order of building blocks, of these sugars (MIT Tech Talk October 20, 1999). "Once you have the sequence of building blocks for a given polysaccharide, you can start cracking its function in the body," said Professor Sasisekharan.

Similar sequencing techniques for DNA and proteins have been instrumental in shaping the biotechnology industry and have led to applications making those compounds household names. With the new tool, "we hope to articulate that these sugars are also fundamental to biology -- that they're a new and important frontier," said Ganesh Venkataraman, a research associate in the Harvard-MIT Division of Health Sciences and Technology.

Heparin, a compound with a variety of important interactions within the body, is one of the most clinically important sugars. For example, doctors have used this compound in surgeries since 1935 to prevent blood clots that can cause strokes and heart disease.

In the work reported in the first PNAS paper, the researchers used the new tool to determine the sequence of a heparin fragment known to have anticoagulation activity and produced by a common technique. They got a surprise. Their results didn't agree with the sequence reported earlier by other scientists. After re-checking the structure using other, more time-intensive tools, the new sequence stands.

The new sequence reveals that the heparin fragment produced by this particular technique contains only a partial active site, or area key to anticoagulation activity. And that, in turn, affects drug activity. The second PNAS paper proves this.

The work has even wider implications. Until now there's been no quick and easy way to determine the composition of heparin produced by any technique. The same is true for a newer generation of heparin products called low molecular weight heparin (LMWH). As a result, the strength of both drugs varies from manufacturer to manufacturer; even from batch to batch. "So the MIT tool could change how the FDA will probably handle heparin," Dr. Venkataraman said.

Professor Sasisekharan emphasizes that commercially available heparin is still quite safe. Doctors have more than 50 years of experience in using the drug. "We're simply hoping to use this new tool to make the drug more consistent and hence better," Dr. Venkataraman said.

The team is currently working to make the technology commercially available. Patents are pending. "Our hope is that sugar sequencing will become as commonplace as for DNA and proteins," Professor Sasisekharan said.

The work is funded in part by the Arnold and Mabel Beckman Foundation, the NIH, and a Whitaker Health Sciences Fund Fellowship.

A version of this article appeared in MIT Tech Talk on September 13, 2000.