Here and there at Commencement 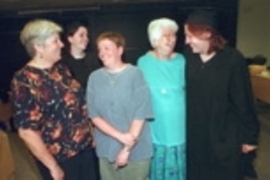 Eileen Riley is the mother of not one, not two, but three MIT graduates, two of whom received degrees at last week's Commencement.

"There was no plan to have them all go to MIT," Mrs. Riley said. "They each made this choice, and they're all so different."

She mentioned that the only bittersweet part of the occasion is that her husband Ted couldn't be there. He passed away three years ago while Kate was a freshman. He did, however, attend the earlier ceremonies for Nancy and Patricia, "and we know he'll be there in spirit," Mrs. Riley said.

Grandparents Ruby and Francis Rooney of Somerville are also proud of their granddaughters' accomplishments. Mrs. Rooney was on hand for the ceremony; Mr. Rooney wasn't able to attend.

The family is from Woburn, MA, though "my girls will never move back there," Mrs. Riley said. "They're city girls."

Among the special guests invited to this year's graduation ceremony were the parents of Michele Micheletti, who was struck and killed by two cars in 1997 while trying to cross Memorial Drive. Ms. Micheletti was a member of the Class of 2000.

Shirley and Elmer Micheletti were "very pleased to be asked to attend what would have been Michele's graduation," said Paul Parravano, co-director of the Office of Government and Community Relations. Mr. Parravano was Ms. Micheletti's freshman advisor. "Elmer told me that no one on his side of the family ever finished college, so this will be his first commencement. In his words, 'we are honored to be invited.'"

The Michelettis also met with President Charles Vest and attended an informal reception for them hosted by Robert M. Randolph, senior associate dean for undergraduate education and student affairs, and Mr. Parravano.

MIT is providing funds to install traffic signals on Memorial Drive to make crossing safer for pedestrians. "Negotiations to get this work done are currently underway," Mr. Parravano said. "In speaking with Elmer Micheletti, I learned of [the family's] great joy that these signals will finally be constructed."

Mortarboards were everywhere on Friday -- not only on graduates' heads, but also atop a Henry Moore sculpture in Killian Court and the pedestrian crosswalk light at 77 Massachusetts Ave. (see Tech Talk's online Commencement photo gallery). The latter two, however, appeared to be hacks -- outsized squares of black cardboard festooned with red yarn tassels. One student's mortarboard was trimmed along all four sides with brightly colored toy trains. The Boston Globe featured a photo of it in the June 3 issue. The grad turns out to be Jon Makler, who received an SM in transportation.)

Graduates wore a variety of other adornments over their black robes. Some of the more interesting included leis made of orchids or leaves. A little sleuthing couldn't solve the following mystery, however: at least five male graduates were seen wearing what appeared to be long necklaces of large black marble-like stones. Any clues?

The 1999-2000 Knight Science Journalism Fellows donned Knight Science baseball caps complete with Scotch-taped tassels to receive certificates from President Vest. Afterward, "we threw them up in the air," said Pete Spotts, who has since returned to the "civilian world" and his job as a science and technology writer for the Christian Science Monitor.

Knight Fellowships aim to improve the quality of science journalism in the mass media by offering experienced reporters the opportunity to take courses at MIT for a full academic year. The 1999-2000 Fellows included seven journalists from the United States and one each from India, Switzerland and Korea. The program is directed by Boyce Rensberger.

A SEA OF LEMONADE

How many gallons of free lemonade did Commencement guests drink? "Many, many, many!" said one of the women pouring the drink into countless plastic cups for passersby.

"At one point we had a line farther than the eye could see," she said. "I was thanking God when the processional started."

Two MIT alums and a friend continued a long-standing tradition for the School of Humanities and Social Science (HASS), playing violin, viola and cello for people at the school's breakfast reception Friday in the courtyard of Building 14.

"I just love these musicians," said Bette Davis, coordinator of the HASS office and the reception. "Putting on this breakfast is so stressful, and they're always here early. In the past they've helped set up tables, too!"

The three were told that "everyone's saying they're surprised you're awake" (the breakfast runs from 7:30-8:30am). "So are we!" Ms. Wingfield quipped.

Commencement guests waiting for the graduates to assemble were riveted to a large screen that broadcast a range of MIT video clips interspersed with two live emcees asking questions of the audience.

Clips included the 2.007 mechanical engineering design contest and a collage of representative scenes from MIT (football, a robotic submarine, dancers and microscopic images of live cells). Also featured was a video about the faculty and 13 graduating seniors who built mini-satellites, then tested them this spring in near weightlessness aboard a NASA plane.

The emcees were Professor Emeritus Samuel J. Keyser and Warren Seamans, who in 1996 retired as director of the MIT Museum. Among other things, the two searched for the parents who probably traveled farthest for the ceremony, then interviewed them. The winners were a couple from Prague in the Czech Republic. Their daughter was graduating with dual degrees in biology and chemical engineering; both parents are chemical engineers.

Countless children also attended the ceremony, often with toys in hand. Among the distractions: a pink plush pig, a Mickey Mouse backpack, a handheld computer game, a teal-colored squirt gun, a pink balloon, and lots and lots of pacifiers. At least five little girls wore gorgeous dresses with tulle skirts like those of a ballerina. Is this the new style for two-to-four-year-olds?

One graduate made her march wearing shoes with nearly stiletto heels. "Better woman than I," remarked an astonished observer.