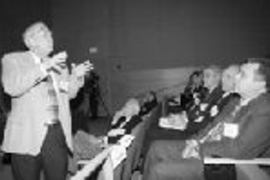 More than 250 people from around the world gathered last week to hear about the future of civil and environmental engineering as MIT's department of the same name celebrated its 135th birthday.

In one of five panels at the two-day affair, William J. Mitchell, dean of the School of Architecture and Planning, explored the evolution of building design and construction ranging from the pyramids to the coming Ray and Maria Stata Center for Computer, Information and Intelligence Sciences at MIT.

"We are operating in a new context, where the future will be determined by [such things as] information technology and environmental concerns," said Professor Rafael L. Bras, head of the Department of Civil and Environmental Engineering (CEE), in a wrapup of the colloquium. He noted several challenges that the profession is facing. For example, "sustainability was mentioned in almost every [colloquium] session." And with respect to the recruitment of new civil and environmental engineers, "there is a need for early intervention -- not only to elementary schools, but also to freshmen in college."

Professor Mitchell said the traditional conception of a building is changing. "The functions of buildings are rather more complex than in the past," he said. Dividing this evolution into three categories, he explained how pre-industrial buildings "consisted of a skeleton and skin," whereas those in the industrial era added mechanical physiologies such as ducts, pipes and wires. Now, as we move into the post-industrial era, "buildings are becoming more and more like living organisms," Professor Mitchell said, pointing to their "digital electronic nervous systems."

Buildings were also designed in different ways depending on the era in which they were created. For example, today "architects depend on computer-aided design (CAD) systems and computer networking to collaborate with geographically distributed teams."

And CAD systems, in turn, are allowing more complicated buildings such as what Professor Mitchell called the "first building of the 21st century" -- Frank O. Gehry's Guggenheim Museum in Bilbao, Spain (Mr. Gehry is also the designer of the Stata Center). "It's not made of repeating forms like a typical high-rise office building," he explained. Rather, CAD allowed "quite complicated curvy structures."

One member of the audience drew applause when he said the design of the Stata Center represented "information technology gone amok." With exceptional good humor, Professor Mitchell wagered that in 10 years, when the Stata Center is built and occupied, people will appreciate it. He also noted the courage it takes to try something different.

Professor Hans Bjornsson of Stanford University, one of three other panelists in the same session, agreed that 3D modeling is the most important tool for architects right now. Further, "the Internet will fundamentally change the [construction and design] process," he said. For example, contractors might submit bids over the net.

Commenting on information technology and education, CEE Professor John Williams, another panelist, warned that the university business model may break as "star professors" are lured away to Internet ventures that will pay them more. However the fourth panelist, Gavin Finn of Prescient Technologies, noted the "the opposite will happen as well: people who have made their millions will come back to teach."

The New Millennium Colloquium on the Future of Civil and Environmental Engineering, which also celebrated the Ralph M. Parsons Laboratory's 50th anniversary and the inauguration of the Donald and Martha Harleman Professorship, included three keynote talks. It was followed by an alumni/ae day, during which about 100 alumni/ae attended activities such as a panel discussion on women in science and engineering (see article on page 1) and an open house at the Geotechnical Laboratory.

Since a key focus of CEE is the environment, keynote speaker Robert W. Corell talked about trends in environmental change research. Dr. Corell, who until recently served as assistant director at the NSF for the Geosciences Directorate, described a meeting last fall with former US Rep. Newt Gingrich that underscores the importance of this field.

"He told us that there are only four issues that will get a congressman's immediate attention: health, safety [of our individuals and institutions], and jobs." The fourth -- "the new boy on the block" -- is the environment.

Dr. Corell, now a senior research fellow at Harvard, also described a soon-to-be-released report on the role of the NSF in environmental research in the 21st century. While strongly endorsing the agency's "fundamental operating principles and leadership," he said, the report also says that "environmental activities within the NSF must be organized more effectively and receive greater funding." It should be on the web within a week.

The two other keynote speakers were G. Wayne Clough, president of the Georgia Institute of Technology, and Travis Engen, chief executive of ITT Industries, Inc.

Talks by Harl P. Aldrich (SB 1947, ScD) and MIT Professor Robert V. Whitman (SB 1949, SM, ScD) at the Geotechnical Lab open house proved the "really preeminent roles" Harvard and MIT played in establishing soil mechanics as an important subdiscipline of civil engineering. To that end, Dr. Aldrich strongly recommended Karl Terzaghi: The Engineer as Artist by Richard Goodman. Dr. Terzaghi, who held positions at both MIT and Harvard, was one of the discipline's pioneers.

The primary focus of current research in the lab is on "the measurement and modeling of soils and rocks," said Professor Andrew J. Whittle. His research on soil modeling has been key to deep excavations for the MBTA and the ongoing Central Artery/Tunnel work, as well as tunneling for a new transportation system in Puerto Rico.

How fluids flow through porous media such as soils and fractured rock is the focus of Professor Patricia J. Culligan's work. Recently her group has started looking at these mechanisms on the micro scale via nuclear magnetic resonance imaging.

Professor Herbert H. Einstein, who said he "used to do lunar soil mechanics, but still reaches for the moon," works on projects including decision aids for tunneling. (He is known for developing a widely used rock tunneling model.)

Dr. John T. Germaine, a principal research associate at the Geotechnical Lab, is especially interested in the behavior of materials -- "clay, foams, soft rocks, you name it." He also developed flexible automation technology for computer-assisted testing (FAT CAT), which has resulted in dramatic labor savings and increased productivity for experiments conducted in the lab.

Posters of other current research projects adorn the walls outside the lab (Rm 1-350).

The colloquium was sponsored in part by the NSF. See the event's web site for white papers and other information.