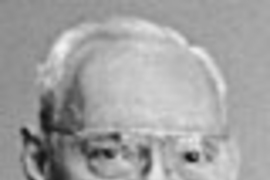 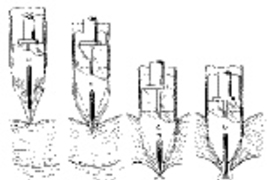 ↓ Download Image
Caption: This diagram from Professor Blanco's trocar patent application shows the progression of his trocar as it pierces the skin during endoscopic surgery. At the moment the sharp point perforates through the skin (third image), the safety guard has already fully deployed, protecting internal organs. A puff of CO2 further safeguards the organs by gently blowing them out of reach. 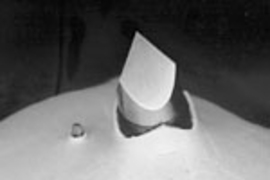 ↓ Download Image
Caption: This photo compares the new trocar (left) with another commonly used trocar. The standard trocar (right) has pierced the body (actually a synthetic test material) by about 14mm without the safety guard deploying; the guard on the new trocar has already deployed.

Caption:
This diagram from Professor Blanco's trocar patent application shows the progression of his trocar as it pierces the skin during endoscopic surgery. At the moment the sharp point perforates through the skin (third image), the safety guard has already fully deployed, protecting internal organs. A puff of CO2 further safeguards the organs by gently blowing them out of reach.

Caption:
This photo compares the new trocar (left) with another commonly used trocar. The standard trocar (right) has pierced the body (actually a synthetic test material) by about 14mm without the safety guard deploying; the guard on the new trocar has already deployed.

Before the gallbladder surgery, Ernesto Blanco wanted to know precisely which instrument or "trocar" the surgeon would use to puncture his abdomen. His interest in the trocar was driven by more than mere curiosity -- the gallbladder was his own -- and by something other than personal concern.

Adjunct Professor Blanco, a mechanical engineer and inventor, loves mechanical devices; the tools used in endoscopic surgeries, minimally invasive surgeries that have all but replaced many of the traditional "open" surgeries of the past, hold a special appeal for him.

For several years he had been working on an idea for a device that would make the initial puncturing of the body safer in these procedures. And now he's finally solved the problem by designing a better trocar.

To begin endoscopic surgeries, the abdomen (or knee, wrist, hip, etc.) is pierced using a pointed instrument called a trocar, about the size and shape of a ballpoint pen, which is enclosed in a tube called a cannula. Once the trocar has pierced the skin and its tip pushed inside the body, the surgeon pulls out the trocar, leaving only the small piece of tubing through which other instruments used in the surgery will be inserted.

Although minimally invasive surgeries are better in many ways than open surgeries -- shorter healing time, less chance of infection -- that initial entry is fraught with danger. According to Professor Blanco, no matter how you slice it, even the best surgeons in the world can't always control what he calls the "plunge effect" -- the sudden change in resistance that occurs at the instant when the trocar's tip pierces the body cavity.

As it turned out, luck wasn't with Professor Blanco on the day he had his gallbladder removed.

When the surgeon plunged the trocar through the professor's abdomen, the sudden drop in resistance as it penetrated the skin caused the sharp instrument to plunge in just a fraction of an inch too deep, apparently nicking one of Professor Blanco's organs and putting an abrupt end to the minimally invasive surgery.

Instead he had to be opened up the old-fashioned way, with a scalpel and a four-inch incision. The inadvertent damage was repaired and his gallbladder removed, but the difference for Professor Blanco was a four-day hospital stay instead of an overnight, an ugly scar instead of a barely visible mark, and an increased risk of infection.

But he doesn't blame the surgeon. Occasionally even the best surgeons have trouble controlling the plunge effect. The problem lies with the so-called safety trocars, "which in the opinion of many surgeons are far from being safe," said Professor Blanco, adding that this sort of thing happens "more often than surgeons would like to be known, and fatal cases are on record."

The trocar he designed should eliminate that risk altogether, he said, by changing the shape of the instrument's point and the way the safety guard deploys at the moments during and just after penetration of the body.

Traditional trocars have a solid, three-sided triangular point (the name stems from "trois," the French word for three); Professor Blanco's resembles two flat, arrow-shaped knives intersecting to look like a X when viewed from above, yielding a four-edged cutting tip ending in a sharp point.

Although it sounds dangerous, his device actually puts the "safety" back in safety trocars. Trocars have a safety guard that springs up around the tip after the puncture has been made. How quickly the guard is deployed determines how far into the body cavity the blade is able to get before the sharp edges are covered. Some trocars are able to plunge in up to three-quarters of an inch with the blades still exposed.

Professor Blanco's trocar is designed so the protective guard always covers the portion of the blade inside the body, eliminating all danger of cutting internal organs.

Another important aspect of endoscopic surgery provided by his device concerns the insufflation of the patient with carbon dioxide. Filling the abdomen with gas helps to separate organs from the abdominal walls, making the operation easier for the surgeon, whose hands are manipulating a tiny camera and other tools inserted through the trocar but whose eyes are seeing the action on a video screen.

Insufflation is usually started through a hypodermic needle, inflating the body cavity prior to the insertion of the trocar to minimize risks of the plunge effect. Later, more CO2 is pumped in through the cannula.

Professor Blanco's device eliminates the need for preliminary insufflation. The cutting edges on his trocar are thin blades instead of a solid cutter, allowing gas to flow through the tip. This adds a second layer of protection to the patient because at the very instant the point pierces the body, a pressurized jet of CO2 will issue forward, gently blowing aside any delicate organs that might be too close.

Professor Blanco has applied for a patent on the device. Once it has been licensed by a manufacturer, he estimates it will take about a year to build prototypes, test them and prepare for the market.

The Cuban-born mechanical engineer has 14 patents and four patent applications to his name. About half are for medical devices, including an eye stapler used instead of stitches following ophthalmic surgery, a suture remover and other microsurgical instruments. (The suture remover, as it turns out, is a further outgrowth of that gallbladder operation. After experiencing the additional trauma of having the stitches removed from the incision on his abdomen, Professor Blanco was keen to make the entire process easier on other patients.)

Some of his patents are for more whimsical gadgets, like the automatic pancake flipper (MIT Tech Talk, June 21, 1995) that embosses Mickey Mouse's image on flapjacks, now for sale at Disney stores.

Still others are for mechanical devices that could be useful to people from many walks of life. For instance, he designed an automatic page-turner for musicians (MIT Tech Talk, May 19, 1999), then found that many disabled people need an inexpensive, reliable way to turn the pages of their reading materials.

"The intellectual process of creation is exactly the same, whether the goal may be a cooking device or a high-tech microsurgical instrument," said Professor Blanco, who loves the process of inventing. "At the end of the line, every system has to interact with the physical world."

He has a long history of mechanical inventions spanning decades and industries. Before leaving Cuba in 1960, he designed machines for a textile mill and headed the mechanical engineering department of the University of Villanova. During and just after the Cuban revolution, he was named chief of research in unconventional energy for the new government, and he designed a solar refrigerator, among other things.

That and his other designs were left behind when Professor Blanco, like many of his colleagues, left Cuba with his wife and children to avoid the risk of imprisonment by Fidel Castro's government.

After coming to the United States, he taught at MIT and Tufts University before the "lure of industry took hold," he said. Shortly afterward, "the lure of teaching called again" and since 1977 he has taught half-time at MIT and continued consulting for industry.

In his mechanical design classes, Professor Blanco continually emphasizes to his students the creative aspects of design, which he considers equally important to the analytical. "We try to present creation as the product of analysis, but it's not. Creation is done with the right side of the brain; analysis with the left," he said.

"I like to show my class my inventions and describe the process so they feel the anxiety and uncertainty that we inventors all go through," he said. "Only thus will they be prepared to face the challenges of the future. The future comes from inventing; progress comes from new devices."

A version of this article appeared in MIT Tech Talk on April 5, 2000.