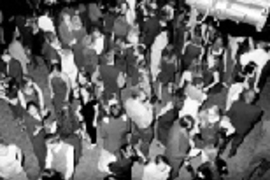 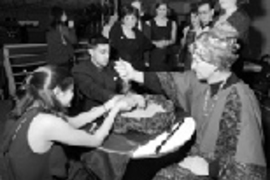 ↓ Download Image
Caption: Sanjay K. Rao and Sonia Garg get some advice using the power of the "seeds of time" at the Millenium Ball. 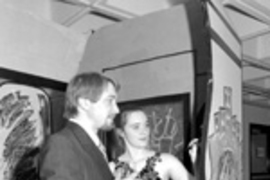 Caption:
Sanjay K. Rao and Sonia Garg get some advice using the power of the "seeds of time" at the Millenium Ball.

About 2,000 people got together on Saturday for an evening of music, dancing and socializing described by those present as "awesome," "spectacular," "thrilling," "electric" and "classy."

The event was the Millennium Ball, the locale was the Stratton Student Center, and those sophisticated and elegantly dressed people were members of the MIT student body, faculty and staff, gathered in one place for one reason only -- to have fun.

"The atmosphere in the place was simply electric, and I was just thrilled to see people having such a good time -- from freshmen to emeritus professors. The students dressed to the nines, they came in great numbers and the faculty and staff showed up in force," said Professor David Mindell of the Program on Science, Technology and Society. He was chair of this year's IAP Planning Committee and responsible for initiating the ball, but quick to say he can't take any responsibility for the end result. "The staff who did the planning really made the project their own, with tremendous results.

"I think we should have the Millennium Ball again next year; after all, that's when the millenium really changes anyway. This one was just a rehearsal," he added.

"The ball was such a fantastic event -- beyond our wildest dreams -- and should end once and for all the unfair stereotype of MIT as Nerd U," said Dean of Students and Undergraduate Education Rosalind Williams. "We are a classy, sociable, wonderful community and Saturday night we had a chance to celebrate this in a way we will all remember."

Ticket sales indicated that approximately 80 percent of attendees were students, primarily undergraduates; the other 20 percent were faculty, staff and their guests.

E Large candles embedded in ice next to delicate dried rushes in vases placed outside the entrances were the first clues that this would be a trip to the Student Center worth remembering.

Inside the lobby, a tuxedo-clad crooner played requests on a grand piano as people exchanged their tickets for small aluminum badges or checked their coats in the former Newbury Comics room.

Just getting up the stairs was a trip in itself; the entire building, set with low lighting, was packed with evening gowns, tuxedos and suits. La Sala de Puerto Rico was filled with dancers grooving to the sounds of some of the best songs recorded over the past 50 years. Refreshment tables and "mocktail bars" lined the room. People stood around the periphery shoulder to shoulder, watching the dancers and greeting friends.

Across the way, the Soul City Band entertained another crowd in Lobdell, now decked out with psychedelic lighting. A curtain of beads separated the food purchasing area -- filled with luscious free desserts this night -- from the dining hall, which was packed with young students who at one point were positioned about 10 deep and 30 wide doing the Electric Slide in unison.

Some guests hung out near the chocolate mousse tower in the Catherine Stratton Lounge; some watched video presentations of MIT's past and present set up by the MIT Museum in the dining rooms; some scribbled graffiti on the walls of the old New York City A-train (really the Wiesner Art Gallery). Still others, obviously anxious about the spring semester, chose to wait in a long line to have their fortunes told by tarot card readers in the Coffeehouse.

Every corner of the building contained dessert tables (some reminiscent of specific historical eras) with cookies and cakes, fruit punch and soda, coffee and tea, and even small retro bottles of Coca-Cola. One table had bowls of Tootsie Rolls and other wrapped candies. All of it came with the modest price of admission: $5 for students and $10 for faculty and staff.And all of it was planned by MIT staff and students. Gayle Gallagher, director of the Conference Services, Events and Information Center, and her staff, along with Ted Johnson of the Campus Activities Complex, handled most of the planning and organizing. They had help from staff in the Office of Academic Services, the Student Art Association, the Musical Theater Guild, MIT Catering and MIT Video Production Services. Many students were also involved, including the Dormitory Council, which arranged for pre-ball dinners in the living groups.

"I thought the ball was spectacular," said Jen Frank of the Dormitory Council, a senior in biology who helped arrange pre-ball dinners, especially in her own living group, East Campus. "I think every MIT student should get the opportunity to see something like this at least once in their time here."

A version of this article appeared in MIT Tech Talk on February 2, 2000.