Future, past of aerospace celebrated by aero/astro department 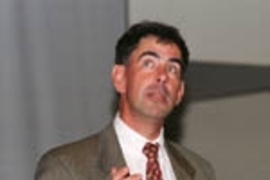 ↓ Download Image
Caption: Professor Edward F. Crawley, head of the Department of Aeronautics and Astronautics, spoke to alumni and faculty at a gathering to celebrate the future and past of aerospace.
Credits: Photo / Donna Coveney

Caption:
Professor Edward F. Crawley, head of the Department of Aeronautics and Astronautics, spoke to alumni and faculty at a gathering to celebrate the future and past of aerospace.
Credits:
Photo / Donna Coveney

From the human exploration of Mars and beyond to the development of tiny engines the size of a shirt button, last week MIT professors, industry leaders and astronauts led alumni and others on a trip to the future -- and past -- of aeronautics and astronautics.

The two-day celebration of the field included the launch of the department's new Learning Laboratory for Complex Systems, and the announcement of 16 young alumni of the Department of Aeronautics and Astronautics (aero/astro, Course XVI) "whose innovation and vision for the future will help to create a future of opportunity."

TO MARS AND BEYOND

By the end of the century, we'll have established at least two bases on the moon, one of which will provide lodging for space travelers. We'll also have a base on Mars resembling those currently in the Arctic. And eventually an interplanetary shuttle will take humans to the red planet in a trip only a few months long.

So predicted Laurence R. Young, Apollo Program Professor of Astronautics, among other visions of the future. He prefaced his comments with a story, however, about predictions of the future made by "100 of the greatest minds in America" about 100 years ago. Their visions for science and technology turned out to be "hopelessly conservative." As a result, he said, "It seems to me that we should think very boldly."

Where should we go beyond Mars? Professor Young, who also is director of the National Space Biomedical Research Institute, ranked the following destinations in order of interest: Titan (Saturn's largest moon), Io and Europa (two moons of Jupiter). All three have conditions that could potentially harbor life.

Titan is the farthest of the three -- "about nine times as far from the sun as Cambridge is," Professor Young said. Its atmosphere contains nitrogen and hydrocarbons, the building blocks of life. Io would smell like a rotten egg because of the sulphur dioxide in its atmosphere, but the same atmosphere might support alternative life forms. Plus, its molten core and continued geologic activity make it "a geologist's dream." The big attraction of Europa: possible existence of liquid water, and lots of it.

Robots will be key to the human exploration of space, said NASA Astronaut Jeffrey A. Hoffman. "Exploration isn't limited to putting our bodies where no body has been before," he said. "It's everything that expands the realm of human consciousness." Virtual reality, for example, will allow us "to put ourselves inside our robots," he said.

Currently there are no robots "sophisticated enough to do some of the things we did when they [Dr. Hoffman and colleagues] fixed the Hubble" space telescope. But he is hopeful that that will change. "If we don't have robots that can eventually repair the Hubble, that will mean that robotic technology will have stalled," he said. "And that will be a tragedy because there will always be places that we can't physically explore."

Dr. Hoffman, too, is "convinced that we will have humans on Mars by the latter half of the 21st century. And these people will control armies of these robots."

An MIT project to develop an engine-on-a-chip with significant advantages over its full-sized brethren was the focus of Professor Alan H. Epstein's talk. Fabricated in large numbers in parallel, these thumbnail-sized engines could one day be used to power laptop computers or even small launch vehicles.

"Over dinner once, a group of us determined that about 3 million could power the Stealth bomber," Professor Epstein said amid chuckles from his audience.

The project has been under way for five years. "Because it's so exciting, it taps into the secret of MIT," explained Dr. Epstein, the R.C. Maclaurin Professor of Aeronautics and Astronautics. "An exciting project gets students interested. We don't tell them how hard it is."

Last month the team, which includes many faculty and some 20 students, put together their first mini engine. What's the timeline for future developments? "In 18 months to three years we'll be using these to power little airplanes," Professor Epstein said. "In five to eight years, we'll have battery replacements, and in the longer term we'll see distributed heat and power on a microscale, plus automotive applications.

"After five years we're convinced that these microelectromechanical systems are possible, promising and even useful," he said.

Professor Nancy Leveson introduced another area of research that is becoming increasingly important: software engineering. "We all know that computers and software are becoming ubiquitous," she said. And as these systems get more complicated, there are more software-related accidents and mission failures.

Last year the department created a new laboratory to address this problem. The Software Engineering Research Laboratory is directed by Professor Leveson. "Traditional engineering design approaches no longer suffice," she said. SERL is developing new approaches. "Our goal is to create an effective and safe partnership between humans and computers." Professor Leveson received a major grant from the NSF last week that will aid the lab's work (see story on page 3).

Of the 16 young (age 35 or under) alumni honored for their "innovation and vision," three are now back at MIT. Carl C. Dietrich (SB 1999) won every undergraduate Course XVI competition in which he participated, and is director and founder of the MIT Rocket Team, a student group committed to decreasing the cost of space access. Mr. Dietrich is a graduate student in the department.

Since 1997 Cory R.A. Hallam (SB 1997) has been lead project engineer for the development of the department's Learning Laboratory for Complex Systems. His goal is to lead the aerospace industry into a new age of operations where corporate success will depend on value stream management, shareholder value, intellectual capital and e-business ventures. He also is a graduate student in the department.

Annalisa L. Weigel (SB 1994) is beginning a PhD program in the new MIT Engineering Systems Division. In a previous position she performed technical and policy analyses of space systems for future defense and national security needs.

A version of this article appeared in MIT Tech Talk on September 20, 2000.