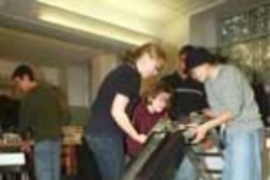 Caption:
Students in 2.009 came up with some useful inventions, including Laddy, a ladder/dolly/motorized tool lift. Putting the finishing touches on Laddy are Heather Marshall (left), Elizabeth Ellingson (crouching) and Kathee Lee, all seniors in mechanical engineering.
Credits:
Photo / Donna Coveney

The mechanical engineering seniors in 2.009 (Product Design Processes) performed last Wednesday evening before an audience of about 90 judges from Boston-area design and product development firms. They didn't actually sing and dance, but they did display a great deal of creativity in six high-energy group presentations of their newly designed, battery-powered, portable consumer products.

Posing as entrepreneurs presenting prototypes to potential investors, representatives of each student team put on their best business faces and suits for 10-minute presentations that included a product video, product demonstration with brief discussion of engineering innovations, marketing plan, business plan and request for investment dollars.

While the product videos were sometimes humorous (for instance, the combination stepladder/hand truck video employed Chariots of Fire theme music accompanying video of a foot stepping onto a ladder rung) and the presentations occasionally whimsical (three students sold their wares wearing old-fashioned golfing caps and red plaid breeches), the products themselves had been seriously considered. Following a strenuous two-and-a-half month product development process that started with the conception of commercially viable product ideas, the six teams of 15-20 students ended by engineering and fabricating the prototypes showcased last week.

The crowd's favorite was the Yellow team's golf-teeing machine, a green translucent box slightly resembling a large home humidifier that holds 80 golf balls for use on a driving range. At the touch of a button, the Golf Teer sends a golf ball rolling down a chute and places it very precisely atop a rubber tee, ready for the golfer to swing. When turned on automatic, the Teer replaces the ball as quickly as it can be hit. Nothing is required of the golfer but continual swinging until all 80 balls have been driven.

As the Yellow team stood in the wings of Rm 34-101, watching their three costumed team members make the presentation, their camaraderie fairly filled the room. The team's enthusiasm and clever presentation swept away the audience, especially their appreciative classmates, who laughed and applauded. The Golf Teer 2000's estimated retail price is $350. Similar machines go for $1,199-$2,900, according to the students.

For those whose sport is baseball, the Red team demonstrated the Fielder's Choice, a training aid for fielders that shoots baseballs out at five trajectories ranging from 5-60 degrees with speeds between 15 and 65mph. The machine allows a single player to practice alone; behind the shooting device is a net that "catches" returned throws and funnels the baseballs back into the machine for the next round. The team demonstrated their product by letting it shoot plastic balls into the auditorium. The first ball was caught by a guest and thrown back into the net, much to the audience's delight. Estimated retail price: $1,096.

Other products included Laddy, the Purple team's "hand truck, ladder and lift in one!" Laddy is a five-foot ladder attached to its own hand truck. Once the ladder is set up, the foot of the truck turns into an elevator to lift 200 pounds of tools to a height of four feet so the worker standing on the ladder can reach them. The team predicts they can manufacture Laddy for $180 and sell it for $500.

Blue Lightening, an emergency transport stretcher with straps that fit both children and adults, has also been equipped with an automatic leg retraction system, making it easier for EMTs to extend and retract the stretcher's legs for ambulance loading and removal. The Blue team's video featured Campus Police EMTs testing the stretcher. The team decided that the best marketing plan would be to license the patents to existing stretcher manufacturers. Estimated maximum price increase for the added features: $500.

The Orange team's SafeRide is a baby walker containing built-in sensors in the wheels that cause one of the back wheels to lock when the wheel approaches an electronic fence. If the child continues walking, she'll go round and round the locked wheel. A fence is made by taping a wire onto the floor, creating a "safe zone" for the child. Consumer price: $90. Manufacturer's price: $40.

The Incredible Haulk (demonstrated by none other than the Incredible Hulk) is a power-assisted bicycle trailer that can haul 100 pounds for 20 miles at 15mph on flat grade. Designed with two seats for children, the little green carriage hitches to the back of a bicycle. A load sensor located in the hitch is linked to a control system so the speed of the powered trailer exactly matches the speed of the bicycle. As the hitch extends when the cyclist outpaces the trailer, the control system alerts the motor, which kicks in to help. The Green team estimates the collapsable Haulk would sell for $1,000 and could be manufactured for $318.

Each student team started out with $6,000 to use for designing and building their products from start to finish. Each color team of about 20 students was first divided into A and B teams, each of which came up with three product ideas. One of those six was chosen for further development. Course sponsors are the Lemelson Foundation, United Technologies, Ford Motor Co. and General Motors.