Class waits 50 years for its turn to lead Commencement procession 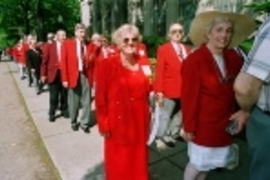 ↓ Download Image
Caption: Barbara Feeney Powers of the Class of 1950 (left foreground) and Mary Agnes Sullivan Davison, who received her MIT PhD that year, march along Massachusetts Avenue on their way to Killian Court with their classmates on Commencement Day.
Credits: Photo / Laura Wulf

Caption:
Barbara Feeney Powers of the Class of 1950 (left foreground) and Mary Agnes Sullivan Davison, who received her MIT PhD that year, march along Massachusetts Avenue on their way to Killian Court with their classmates on Commencement Day.
Credits:
Photo / Laura Wulf

MIT graduates get only one chance to lead the procession into Killian Court, and it's not at their own Commencement.

They must wait 50 years before returning to their alma mater to don the cardinal red jackets of the 50-year class. Then and only then are these seniors allowed to march ahead of the newly graduated seniors, ushering them into the world of MIT alumni/ae.

In this centennial year, the 50-year class is the Class of 1950, which had nearly 1,100 members ranging in age from 19 to 32 at the time of their graduation. It was the largest class to that point and for at least a decade thereafter, as soldiers returning from World War II mixed with fresh-faced high school graduates. Fewer than 10 were women.

According to Alumni/ae Association records, 848 members of the class are living. About 230 of them attended the reunion, bringing with them about as many guests. Robert Mann (SB 1950, SM, ScD), the Whitaker Professor Emeritus of Biomedical Engineering, served as the class president for 50 years. This year, he turned over the mantle to classmate Malcolm Greene.

Retired Professor of Mechanical Engineering Nathan Cook (SB 1950, SM, ScD) compiled class statistics for the reunion book, which notes that the 310 respondents have 2,272 children, grandchildren and great-grandchildren. Seventy-nine percent have been married for an average of 41 years.

Forty-three of the respondents have doctoral degrees (22 from MIT) and 123 have master's degrees (57 from MIT). Twenty-one class members sent their own children to MIT. The members classified themselves as engineers or scientists (65 percent); 44 percent also called themselves business executives or entrepreneurs. Thirty-seven have published books, 76 hold patents and 28 have held public office.

Two hundred forty-two members of the Class of 1950 were in the armed forces; 34 saw action and five were wounded. One hundred fifty-seven used the GI Bill or GI loans to attend MIT. One man served in WWII as well as the Korean and Vietnam Wars; 12 of his classmates served in two of those wars.

Of the 310 respondents and their spouses, 14 have received new hips, 10 have new knees, 78 have undergone cataract surgery and 135 have been diagnosed with hypertension. Fifty-three percent never smoked, 6 percent currently smoke and 41 percent are ex-smokers.

In his reflections published in the reunion book, Francis Winiarski said, "As a senior, burdened by a Scot with another unintelligible accent reading verbatim from his forthcoming textbook, I managed to stay awake by chain-smoking in class."

Frederick Wooten said, "Prof. D.L. Frisch, in freshman physics, illustrated how to approach physics problems. Needing the square root of four, he whipped out his slide rule, peered at it and finally said, '1.99. Oh, hell, call it two.' The whole episode was a great introduction to significant figures and thinking like a scientist."

David Gushee recalled, "More than half of our class were WWII vets and the surrounding classes had a similar high percentage. I was 16 when I entered -- obviously very immature. The ongoing intimate association with so many older, wiser men turned out to be one of the most positive formative experiences in my life."

Women in the class lived at 120 Baystate Rd., 208 Memorial Drive or with their parents.

"They only admitted as many women as could be safely housed," said Margaret Coleman Haas, who lived with her family in Cambridge.

"In the middle of the summer before MIT, it suddenly occurred to me that there wouldn't be many women there," said Dr. Haas. "But once I came it was perfectly natural. I didn't feel uncomfortable at all. We all sat on the front row together."

Mary Agnes Sullivan Davison, who earned her PhD in 1950, was accustomed to being the only woman in the classroom by the time she got to MIT. "I got my master's degree at Tulane in physical chemistry and I was the only woman there, too," she said.

Barbara Feeney Powers, who married Lee Powers, another member of the Class of 1950, said of her years at MIT, "It was sometimes quite cruel. We were called 'Murgatroids' and some of the professors thought we shouldn't be there. But with the women it was great. All 20 undergrads hung out in the Cheney Room and we all got along very well."

Ms. Powers, who is now the Reverend Dr. Powers, had her first child during her senior year at MIT. "I carried her in a basket with me to the library and other places on campus," she recalled. "She spent her first six months on this campus. And the nine months before that!"

On Friday, she said, "I felt like today was my graduation."