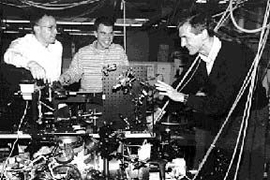 ↓ Download Image
Caption: Michael Andrews, Marc-Oliver Mewes, and Wolfgang Ketterle gather around the machine they and their MIT collaborators used to demonstrate the first atom laser. Mr. Andrews and Mr. Mewes are graduate students in physics; Dr. Ketterle is an assistant professor in the department.
Credits: Photo / Donna Coveney 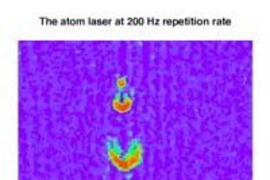 Caption:
Michael Andrews, Marc-Oliver Mewes, and Wolfgang Ketterle gather around the machine they and their MIT collaborators used to demonstrate the first atom laser. Mr. Andrews and Mr. Mewes are graduate students in physics; Dr. Ketterle is an assistant professor in the department.
Credits:
Photo / Donna Coveney

Caption:
The new atom laser emits pulses of coherent atoms, or atoms that "march in lockstep." Each pulse (shown here) contains 100,000 to several million coherent atoms andis accelerated downward by gravity. The curved shape of the pulses was caused by gravity and forces between the atoms. (Field of view 2.5 mm X 5.0 mm.)
Credits:
Photo / Michael Andrews

CAMBRIDGE, Mass.--MIT physicists have created the first atom laser, a device that is analogous to an optical laser but emits atoms instead of light. The resulting beam of atoms can be focused to a pinpoint or made to travel large distances with minimal spreading. In addition, the atoms have the remarkable property of being coherent--they "march in lockstep" to form a single giant matter wave.

The atom laser was a long-sought goal in physics, but there were many doubts whether it could be realized. Early one morning last November, however, MIT physicists led by Assistant Professor Wolfgang Ketterle cheered as they successfully completed an experiment that demonstrated the atom laser. When a regular pattern of dark and bright lines appeared on their computer screen, they knew that they had directly observed the matter waves they hoped they had created.

The new laser, which will be reported in the January 31 issue of Science with an accompanying paper in the January 27 issue of Physical Review Letters, could have a variety of applications in fundamental research and in industry. "Today, if you have a demanding job for light, you use an optical laser. In the future, if there is a demanding job for atoms, you may be able to use an atom laser," said Professor Ketterle, who holds appointments in the Department of Physics and the Research Laboratory of Electronics (RLE).

For example, after further developments the atom laser could be used to directly deposit atoms onto computer chips, creating much finer patterns than currently possible. It could also improve the precision of atomic clocks. Because the atom laser can only operate in a vacuum, however, it will probably not find as widespread use as the optical laser. "It will never be used in supermarket scanners or CD players," Professor Ketterle said with a smile.

Although the MIT team is the first to realize the atom laser, the work is based on that of many others. "I see this achievement as an accomplishment of the field as a whole," Professor Ketterle said.

He noted the pioneering work of MIT Physics Professors Thomas J. Greytak, Daniel Kleppner, and David E. Pritchard, as well as the significant contributions of groups at the University of Amsterdam, Bell Labs, the University of Colorado at Boulder, Cornell, Harvard, the National Institute of Standards and Technology, the Ecole Normale Superieure in Paris, Rice, and Stanford. (Dr. Kleppner is the Lester Wolfe Professor of Physics and associate director of RLE; Dr. Pritchard also holds an RLE appointment.)

A very important intermediate step toward the atom laser was the creation of a new form of matter -- the Bose-Einstein condensate -- which forms at extremely low temperatures around one millionth of a degree Kelvin (that's more than a million times colder than interstellar space). Since 1992, Professor Ketterle's group had developed novel cooling techniques that were key to the observation of Bose-Einstein Condensation (BEC) in 1995, first by a group at the University of Colorado at Boulder, then a few months later by Professor Ketterle's group at MIT.

Named for Albert Einstein and the Indian physicist Satyendra Nath Bose, who postulated its existence more than 70 years ago, BEC is achieved by chilling a gas of atoms to such a low temperature that the atomic matter waves overlap, and the atoms lose their individual identities. They essentially become one big entity, displaying uniform behavior, as opposed to the atoms in a common gas, which flit around independently.

To achieve BEC, the MIT group cooled the gas in two stages. In the first stage, laser cooling, the atoms were bombarded with optical-laser light. The frequencies and polarizations of the laser beams were chosen in such a way that photons emitted by the gas atoms were slightly more energetic than photons absorbed by the atoms. The energy difference is responsible for the cooling effect. After absorbing and emitting about 100,000 photons, the atoms reached a temperature of about 100 microkelvin.

The atoms were then cooled to BEC using a second technique, evaporative cooling. In this technique, the hottest atoms are removed from the atomic sample, thus reducing the average energy (and therefore the temperature) of the remaining atoms. "The same principle cools a cup of coffee and water in a bathtub," explained graduate student Michael Andrews. In addition to being cooled, the atoms also had to be very well insulated from the room-temperature environment. This was accomplished by confining the atoms in a special magnetic trap inside an ultrahigh vacuum chamber.

The realization of BEC meant that the atom laser, previously only the subject of theoretical discussions, was suddenly closer to reality. Now "what was missing to form an atom laser was a controlled way of extracting a beam of atoms from the Bose condensate and a method for determining whether the atoms were indeed as coherent as the photons in a laser beam," Professor Ketterle said. Both these steps have now been taken by the MIT group.

The first step was completed last July when the researchers extracted a beam of Bose-condensed atoms from a sample of a trapped condensate by applying an oscillating magnetic field. This is the work described in the Physical Review Letters paper. The new laser emits multiple pulses of Bose-condensed droplets, each "droplet" containing 100,000 to several million coherent atoms. "It looks just like a dripping faucet," said Professor Ketterle. The scheme that was used to control the pulses coming out of the atom laser was invented by graduate student Marc- Oliver Mewes.

Now the researchers had one significant hurdle left: the demonstration that Bose-condensed atoms are indeed coherent, that they really do act together as one giant wave, a defining signature of a laser.

But it was not clear how long it would take for a Bose- condensed cloud to develop this property, and also how easily the coherence would be destroyed by factors like stray magnetic fields, collisions between the atoms themselves, and collisions between the atoms and the very dilute background gas in the machine. "For photons it's much easier to show coherence," Professor Ketterle said. "Photons don't interact with each other, they are not affected by gravity, and they are not affected by molecules in the air."

In their approach to demonstrate coherence the group applied a standard technique used to show the wave nature of particles or radiation. In this technique, two samples are overlapped. If the photons or atoms in the separate samples are indeed coherent, each sample behaving as a giant wave, then the samples will interfere with each other, much like what happens when two waves meet in a pond. The result: a periodic pattern, or standing wave, that can be photographed.

This is exactly what happened when the MIT team, after 20 hours of aligning and focusing their instruments, ran their interference experiment at around 3 am on November 16 of last year. After getting two Bose-condensed samples to overlap, they saw the interference pattern they had hoped for. The wavelength of the observed pattern--15 micrometers--is gigantic for atomic matter waves. Room-temperature atoms have a matter wavelength of 0.04 nanometers, 400,000 times smaller.

"The signal was almost too good to be true," Professor Ketterle remembers. "We were hoping for some signature of coherence, but what we saw was text-book-like, high-contrast interference patterns. When our camera showed this pattern, we knew that we had realized the atom laser."

"It is a primitive laser," he added. "For example, it only works in a pulsed mode, but we are already planning several improvements."

Key to the coherence work was a new three-dimensional imaging technique the scientists developed to see the fine interference pattern. "We call it a CAT scan--Condensate Absorption Tomography," said Mr. Andrews, playing on the acronym of a well-known medical x-ray technique. Mr. Andrews had a key role in designing and operating the interference experiment.

In describing the overall excitement of achieving the atom laser, Mr. Mewes concluded: "It's one of those rare times in physics when you discover a really new effect. It makes you feel kind of strange--you're seeing something that nobody else has ever seen before."

The work was supported by the Office of Naval Research, the National Science Foundation, the Army Research Office, and the Packard Foundation.